Gajapati district was created from Ganjam District in the year of 1992. It is named after Raja Sahib of the Paralakhemundi estate. Maharaja Sri Krushna Chandra Gajapati Narayan Dev, the (the first Prime Minister of the state Odisha). He is well-known for his contribution to the formation of a separate state inclusion of the Paralakhemundi estate in Odisha. Paralakhemundi, the district headquarter has been clustered within a radius of approximately 5 kilometres. The District is a part of the Red Corridor. Gajapati is famous for cottage industries like Horn work, Jaikhadi bag, Cane and bamboo work, Ganjappa card and Pattachitra Mukha, Broom work and Siali leaf plate making and Tibetan Woolen Carpet contribute to the economy of the District. 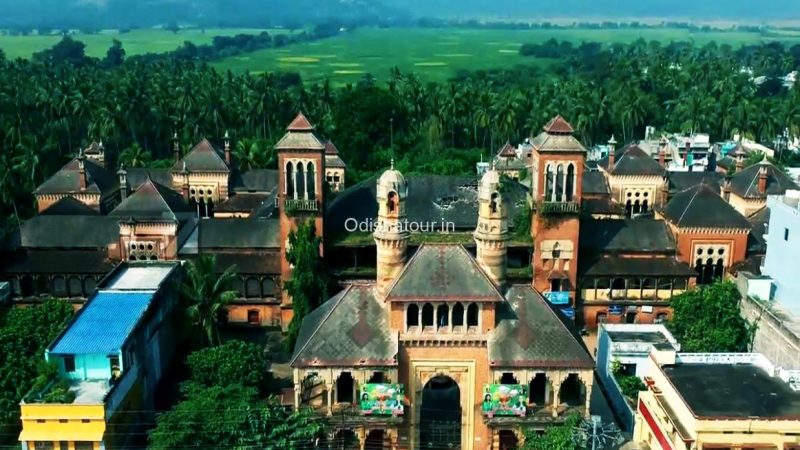 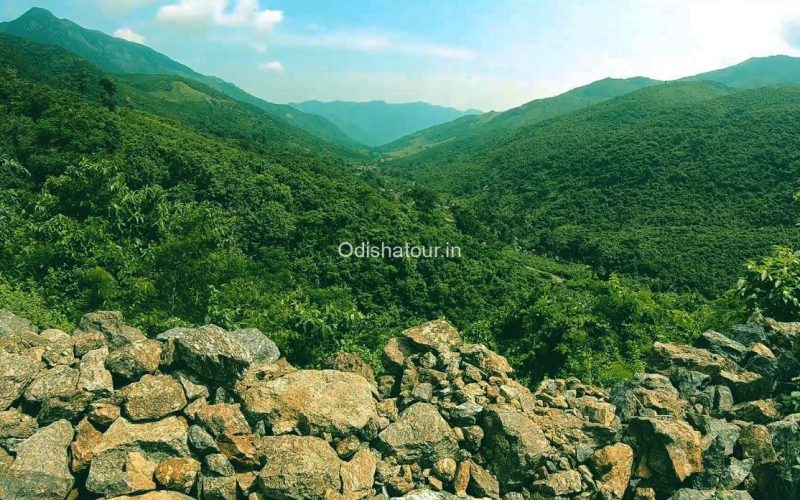 The Padmasambhava Mahavihara Monastery is also known as Thupten Mindrolling Monastery located at Jeerango, Gajapati district, in the state of Odisha, India, as the main monastery belonging to the Ripa Lineage. It is said to be the largest Buddhist monastery in Eastern India. It was inaugurated by the Dalai Lama in January 2010. There is a school for Tibetan studies, and students are staying and reading different courses here. The five-storey monastery has a meditation shrine hall and other small temples, institutes and hostels inside the spread-out complex. The Padmasambhava Mahavihara monastery is one of the Best Tourist places in Gajapati, Odisha 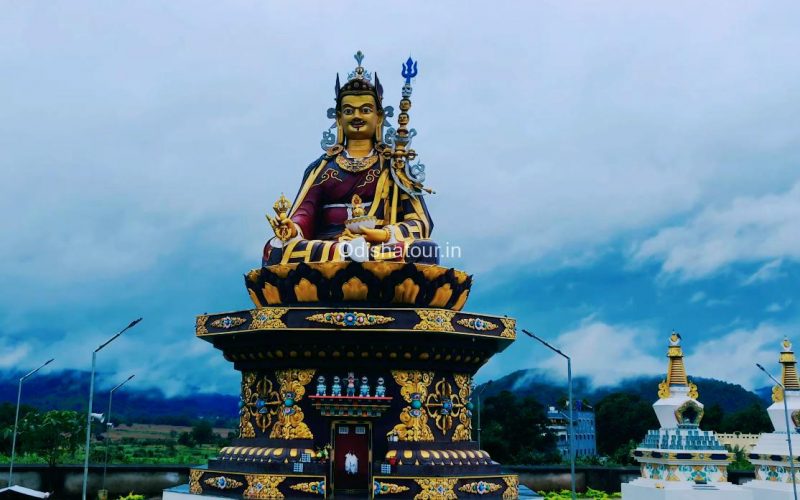 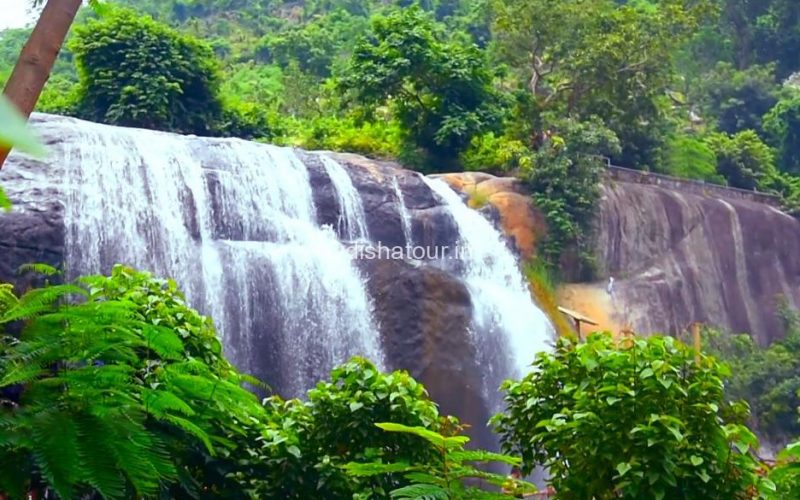 The Gandahathi Waterfall is located at Gandahati village and is about 30 km from Paralakhemundi and 153 km away from Berhampur. The place is so beautiful of the waters is falling from the canals in between the hills. It is one of the most peaceful and pleasant zones for visitors. It is a Peaceful place, and tourists enjoy bathing. Gandahati is one of the muthas of Paralakhemundi Zamindari. Once upon a time, Elephants used to live in this place, now no more. Gandahathi Waterfall is a popular tourist place in Gajapati.

B.N.Palace is located on the bank of river Mahendratanaya at Paralakhemundi and is only 1.5 km from Paralakhemundi Bus Stand. B.N.Palace is also known as Brundabana Palace. It is nearby the Odisha – Andhra Pradesh border. The Brundabana Palace was built by Paralakhemundi Maharaja Krishna Chandra Gajapati. It is believed that the Paralakhemundi ruler started building the palace to enhance the beauty of the state. The king is said to have used the Palace during the summer. A three-storey building with an underground floor at Brundaban Palace. The palace is known for its rich culture among the world heritages. Brundaban palace is one of the tourist places in the Gajapati District. 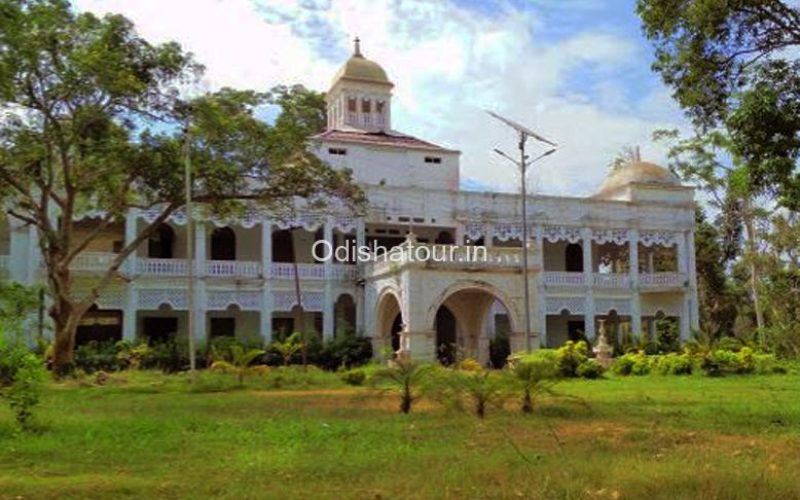 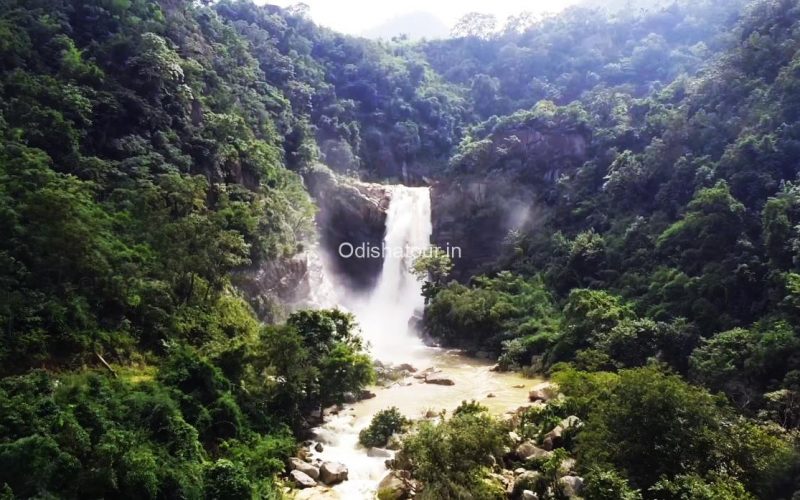 The Mankadadian Waterfall is situated at a distance of around 73 km from Paralakhemundi. This is a waterfall in the eastern ghat region, the environment of the waterfall is so peaceful. This peaceful place on the lap of nature surrounded by greenery and waterfall. The waterfall produces such clean and cool water which is very a stupendous to take a bath of the natural shower and that place is full of natural beauty and a good place for nature lovers. Mankadadian Waterfall is one of the best tourist places in Gajapati District.

The beautiful Khasada waterfall is located only 11 km from Chandragiri and 90 km from Paralakhemundi. The waterfalls continuous flow water from the forest and are Best for bathing in crystal water. The waterfall has surrounded by green scenery and hills, which is amazing to see. The natural stream, dense and thick forest and high mountains attract thousands of visitors. It is a good place for picnics in the winter season. It is best for Picnic, Excursion & Weekend holidays in the winter season. The waterfall is close to the Chandragiri Buddhist Monastery. Khasada waterfall is one of the most popular tourist destinations in Gajapati District. 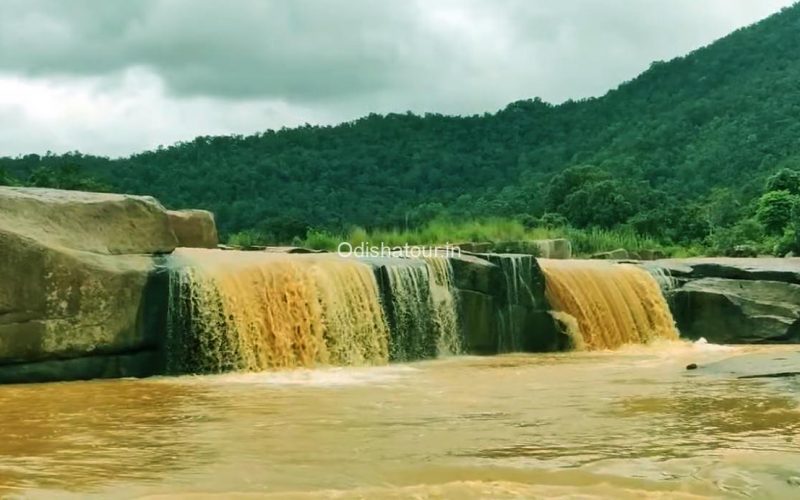 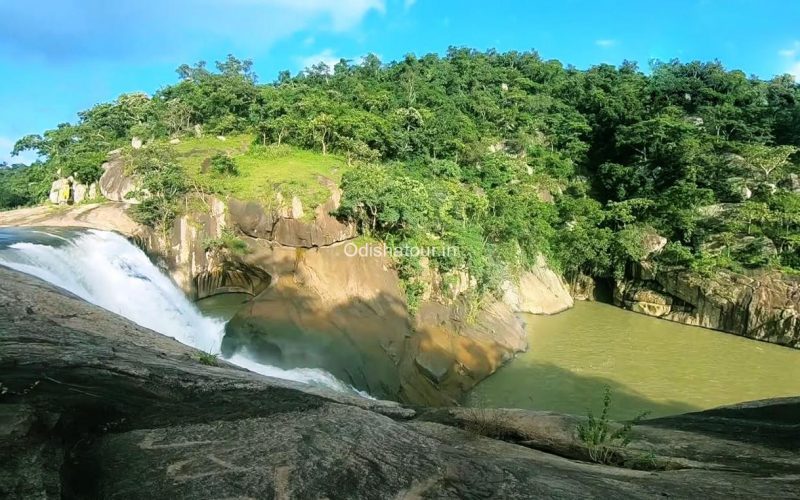 The Gudguda Waterfall is located at a distance of 37 km from Paralakhemundi in the Gajapati district. It has surrounded by hills and forests and is the best picnic spot. The place is nothing but full of natural sceneries. The waterfall has been flowing far and wide. It is a hilly place having a perennial waterfall that creates a pool of crystal clear water. The beautiful natural atmosphere and the sound of the waterfall attract the visiter and picnic rush the spot during winter.  Gudguda Waterfall is one of the most popular tourist places in the Gajapati District.

Chandragiri Buddhist Monastery is located at a distance of 80 km away from Paralakhemundi. One of the beautiful places and India’s one of the most famous Buddhist temples. In 2010 it was inaugurated by His Highness Dalai Lama. The temple has located in the eastern ghat region of Odisha. The environment of the place is so peaceful. This peaceful place on the lap of nature has surrounded by greenery and a waterfall. Now Chandragiri Monastery has a modern look, and many people come to visit this place to see the Tibetan culture. There are also Jagannath Temple, Maa Kureisuni Temple in Near Chandragiri. It is the best picnic spot, and tourists come to during winter. Chandragiri Buddhist Monastery is one of the tourist places in Gajapati. 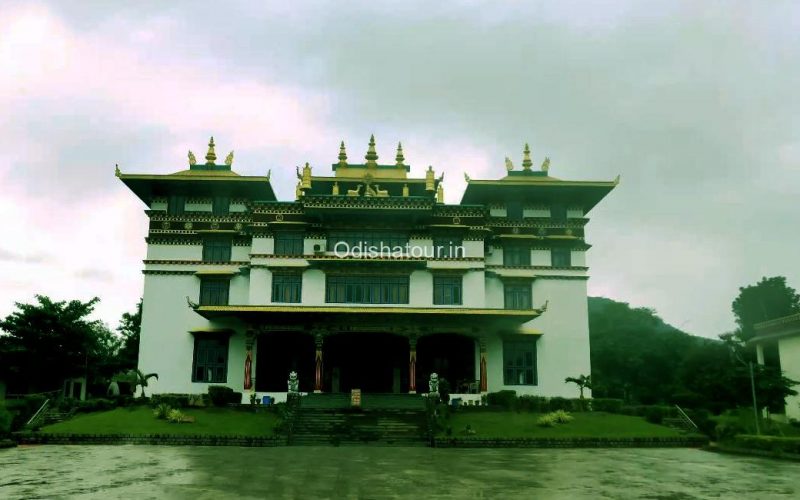 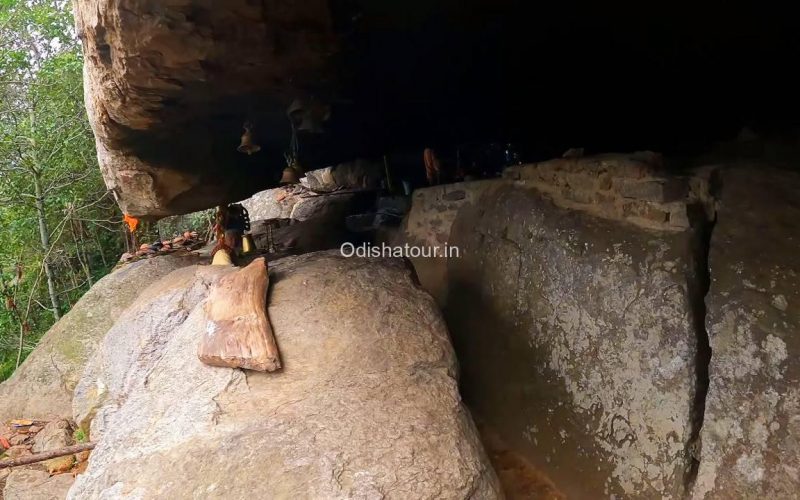 Luha Khambeswara Shiva Temple is situated inside a Cave at the top of Luhakhamba Mountain Peak. It is 27 km from R. Udayagiri and around 82 km from Paralakhemundi of the Gajapati district. Lord Shiva is worshipped in an iron incarnation, so he is known as Luha Khambeswar. Karthika Purnima is the main festival of the temple, and devotees come here to watch the Function. To reach Luha Khamba Temple, you have to walk about 6 to 7 km up the hill. The Luha Khamba Shiva Temple is famous in the Gajapati district.

Harabhangi dam is located about 6 KMs North West of Adava, and it is 28 km from Mohana and around 132 km from Paralakhemundi. The purpose of the Harabhangi Reservoir is to store water for irrigation. The Harabhangi has surrounded by mountains and green forests. A large number of tourists come here to visit and feast on the Reservoir in the winter. There are also viewpoints, and Guesthouse facilities are available for tourists.  Harabhangi dam is one of the most popular tourist places in the Gajapati District. 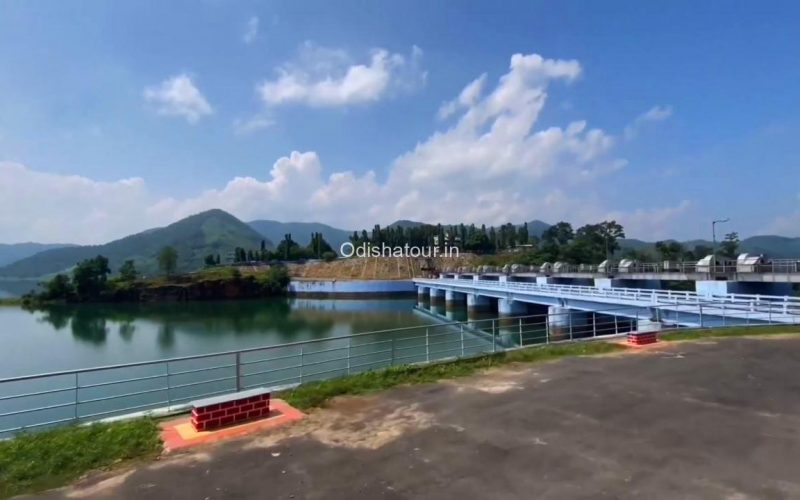 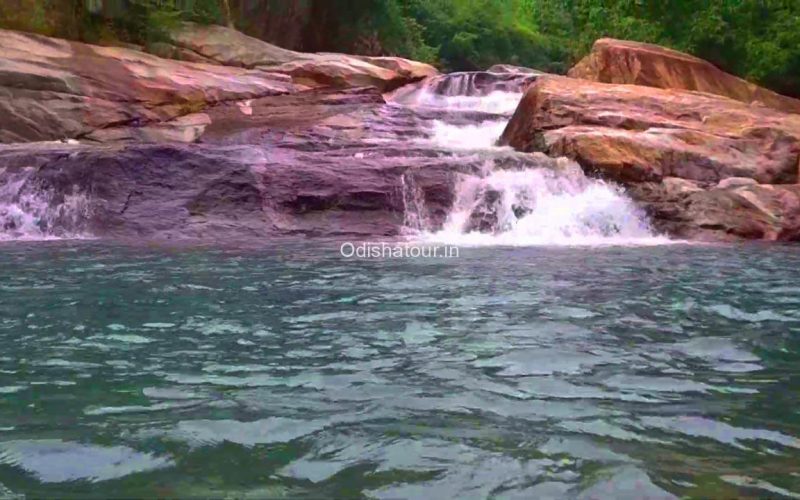