Sambalpur is 320 km from Bhubaneswar. It is the headquarter of the district and is connected with major towns and cities of India. It is the gateway of the Western Odisha region like Kalahandi Balangiri and Sundargarh. Sambalpur is famous for dye weaving with artistic design. The Handloom producer of Sambalpur is known as Sambalpuri. The entire district is full of mountains and dense forests and small waterfalls. It is said that previously it was the place for the production of diamonds. The name of Sambalpur derives its name from its Goddess Samalai or Samlaleswari Goddess. Samaleswari is the famous Sakti Pitha of Odisha. Besides Sambalpur university, V.S.S Medical College and the University College of engineering at Burla enhanced the dignity of the district.

The District observed many beautiful festivals around the year. Sital Sasthi is observed in June. This festival is the marriage ceremony of Lord Shiva and Parvati. Nuakhai is the most important social festival of the District. Bhaijiuntia festival is celebrated on the Mahastami Day of Durga Puja. The Puajiuntia festival is observed by mothers to invoke the grace of Lord Dutibahana for the long life and prosperity of their sons. Best Tourist Places To Visit in Sambalpur

Hirakud Dam is situated 16 km distance from Sambalpur town in the state of Odisha. It is the longest Dam in the world. Behind the Dam extends a lake, Hirakud Reservoir. Hirakud dam is built on the Mahanadi river and is 200 ft in height, and the reservoir spreads 746 sq. Km, which contains the shape of an artificial lake in Asia has a shared line of 640 km. The sight of the dam can be enjoyed from the minarets standing on the top of another side of the Dam called Gandhi Minar and Nehru Minar. The place is extremely valued for its scenic beauty attracts people for a weekend picnic. Hirakud Reservoir is one of the most popular tourist places in the Sambalpur District. 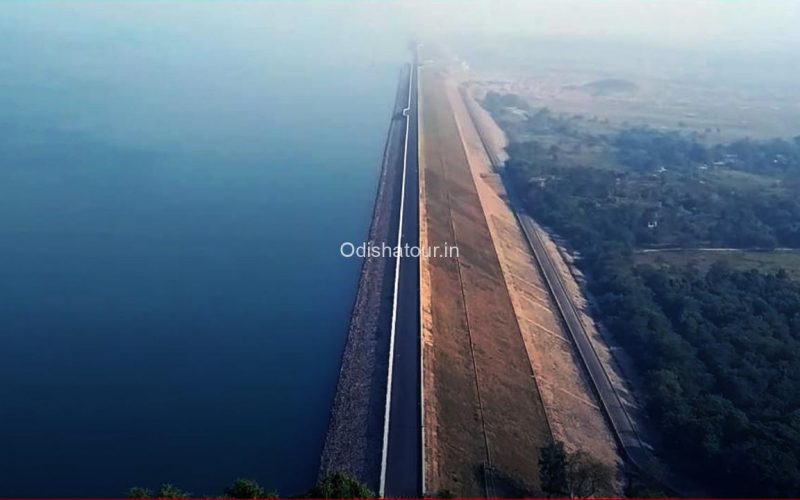 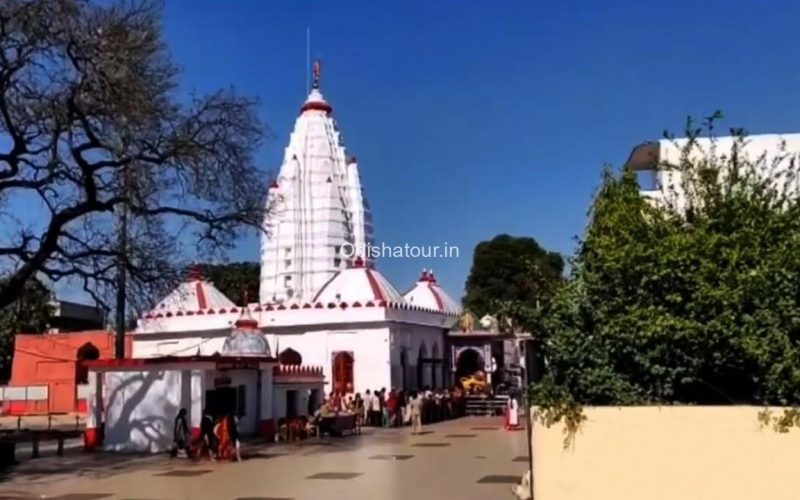 Samaleswari Temple is located at a 3 km distance from Sambalpur Town on the bank of the river Mahanadi. Maa Samaleswari is the presiding deity of Sambalpur. It is a strong religious force in the part of western Odisha. The mother goddess Samaleswari is worshipped from ancient times as Jagatjanani, Adishakti, Mahalaxmi and Mahasaraswati. The region in which the temple is situated has a rich cultural heritage. Sambalpur region is popularly known as Hirakhanda from ancient times. Ptolemy has described the place as Sambalak. Samaleswari Mandir is a famous tourist places near Sambalpur 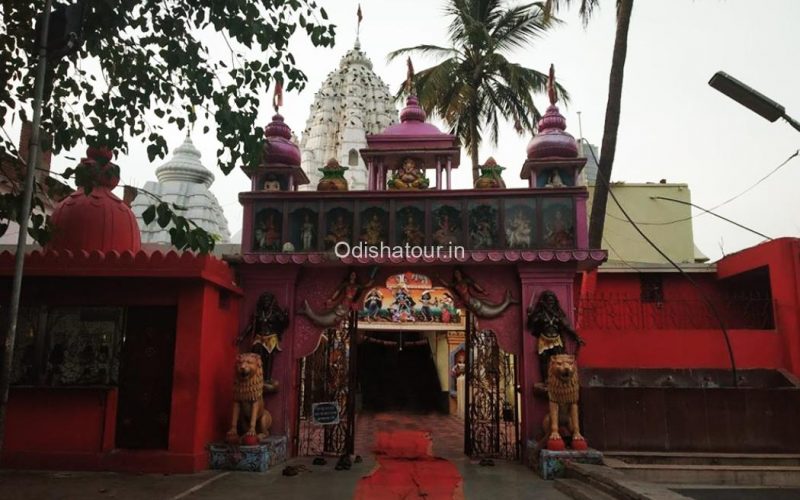 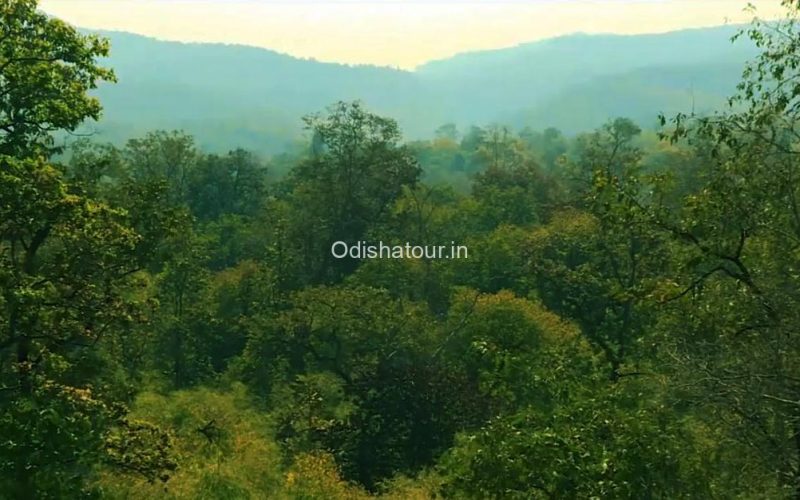 Ushakothi is 48 km to the north of Sambalpur on NH no 6 towards Deogarh. There is a wildlife sanctuary that especially attracts international tourists. Here is the free moment of wild animals like tiger, deer, leopard, Sambar, spotted deer, and elephants etc. Can be seen by the visitors along with its natural sight. The sanctuary comprises parts of Badrama Reserve Forests, Ushakothi. The Sanctuary is located in the western part of the Hirakud Dam and is surrounded by the Moist Sal Forests and bamboo Forest. Ushakothi Sanctuary is one of the most popular tourist places in Sambalpur, Odisha.  Ushakothi Sanctuary is one of the popular tourist places in Sambalpur. 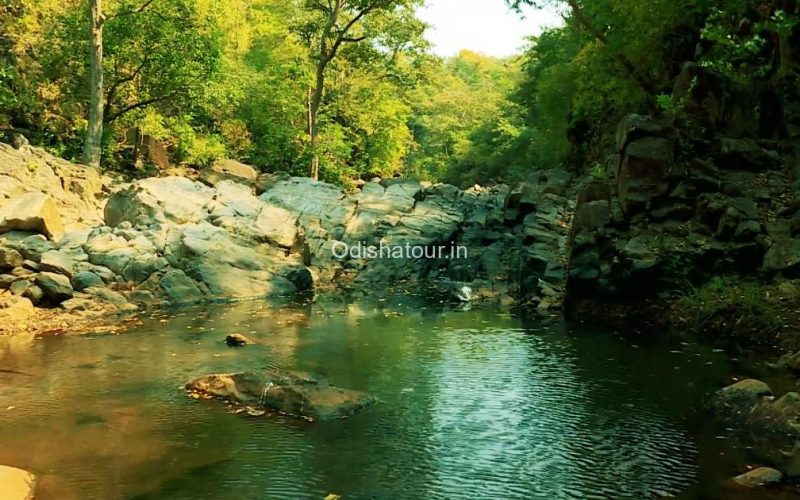 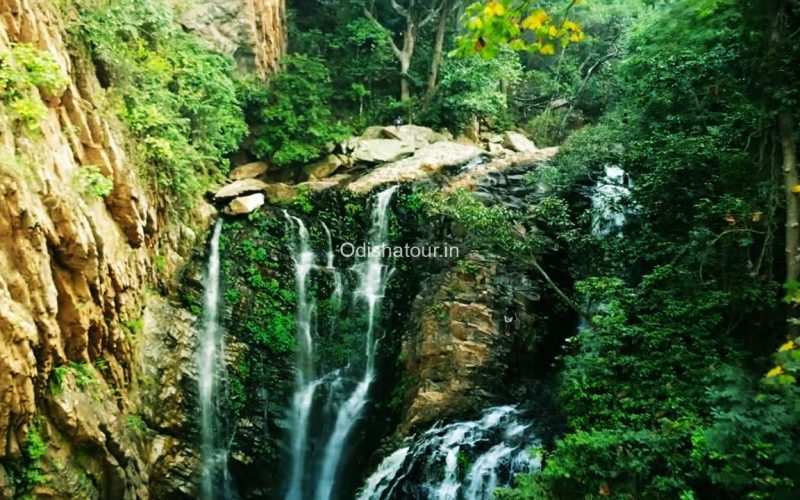 The Gudguda Waterfall is located at a distance of 96 km from Sambalpur town and 78 km from Jharsuguda. The Place is surrounded by Saal, Pia Sal, Mahul forests and hills. The Falls water is clean, and the water is cold, which makes it a pleasure to bathe. Beautiful natural surroundings and the amazing sound of waterfalls attract tourists to come here. Thousands of visitors flock to the waterfall every year for weekend picnics, family trips and other recreational activities. This Place is also best for Mountain Trekking. Gudguda Waterfall is one of the best tourist places in the Sambalpur District.

Huma temple is located at a distance of 23 km from Sambalpur town and the left side bank of the river Mahanadi. Huma is famous for the leaning shiv temple. Lord Bimaleswar Siva is the presiding deity of this temple. The Shiva temple was built in the reign of Baliar Singh, the fifth Raja of Sambalpur. The playful Kudo fishes are the main attraction of the temple. Huma Shiva Temple is a famous temple in Sambalpur District. Boating is available at the Mahanadi River near the Huma Temple to entertain tourists. Huma Leaning Mandir is a famous temple in Sambalpur. 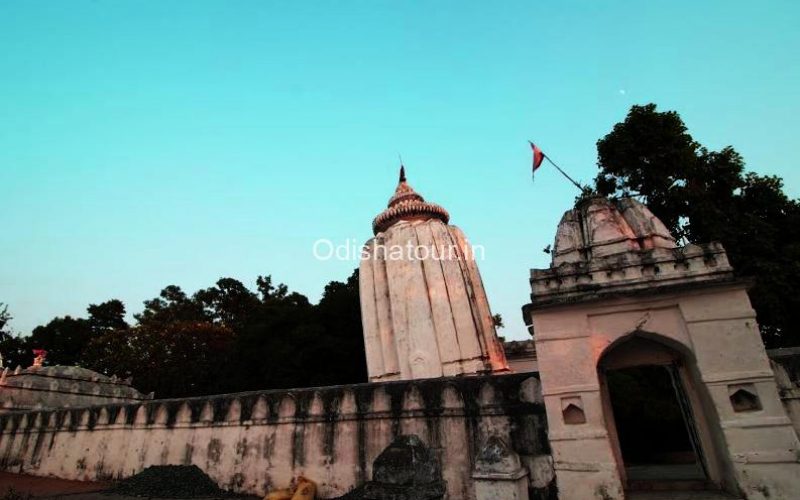 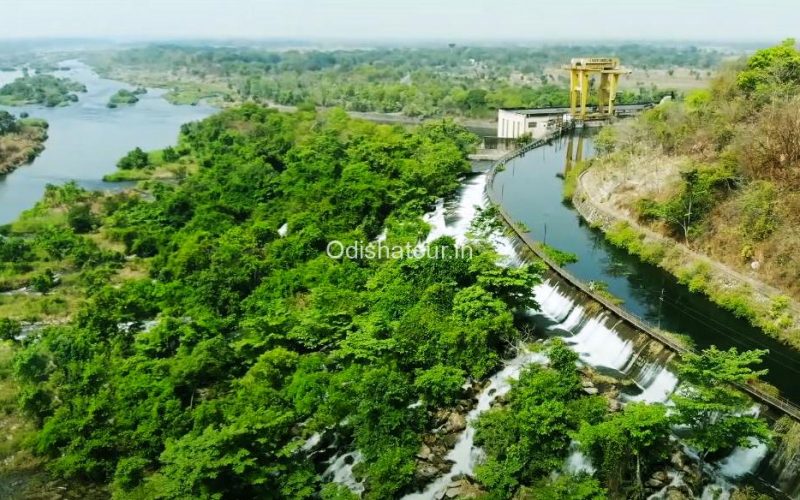 Chiplima Dam is 38 km from Sambalpur and situated on the right side bank of the river Mahanadi. The 80 ft high natural fall on the river Mahanadi has been used as the second Hydroelectric project of Hirakud dam. It is also a religious place for the goddess Ghantalei and the presiding deity of the locality. The multi-purpose Hirakud Dam across the river Mahanadi was constructed for flood control, irrigation and power generation. Chiplima is one of the popular tourist places in Sambalpur.

Ghanteswari Temple is situated on the bank of river Mahanadi near the Chiplima Power plant and is 33 km distance from Sambalpur town. As the name indicates, there are bells (Ghanti) everywhere. People offer bell to Maa after their the fulfilment of their wishes. A large number of pilgrims visit this place every day from across the state. This temple area is thousands of bells hanging all around, the only place of its kind in Odisha. The temple got its name from the goddess Ghanteswari.  Maa Ghanteswari Mandir is one of the holy and tourist places in Sambalpur. 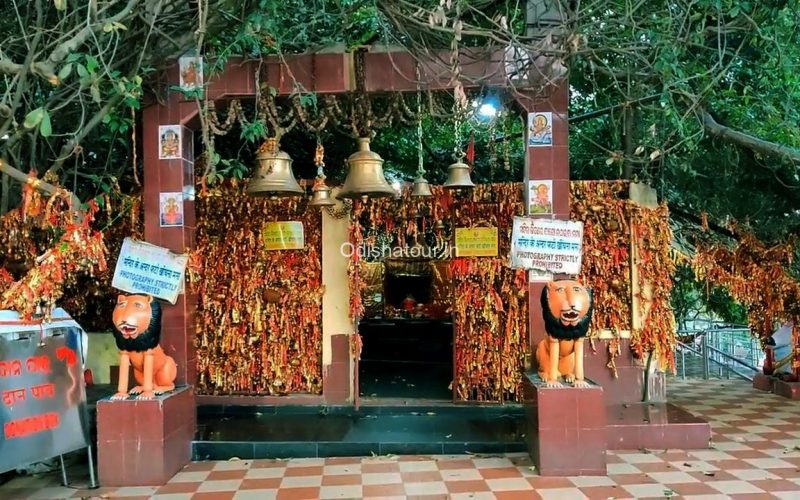 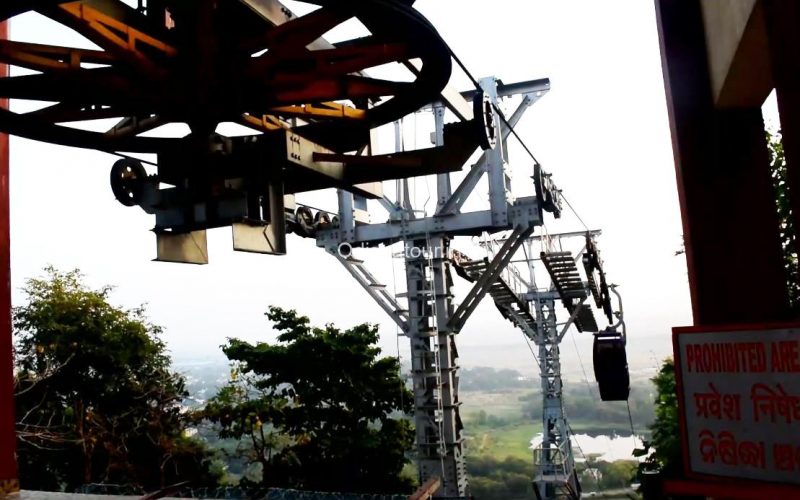 The Hirakud Ropeway is located near the Hirakud Dam and 15 km from Sambalpur town. The Hirakud Ropeway provides a connection between Jawaharlal Nehru Garden and Gandhi Minar. There are 12 cabins to travel on the ropeway having the capacity to carry four passengers at a time. The ticket price is Rs. 60/- for a two-way journey. The ropeway is open from 10 AM to 6 PM daily except Monday for visitors. It is a popular tourist destination in Sambalpur.  The ropeway is an added advantage for the tourists to get a better view of the Hirakud dam. 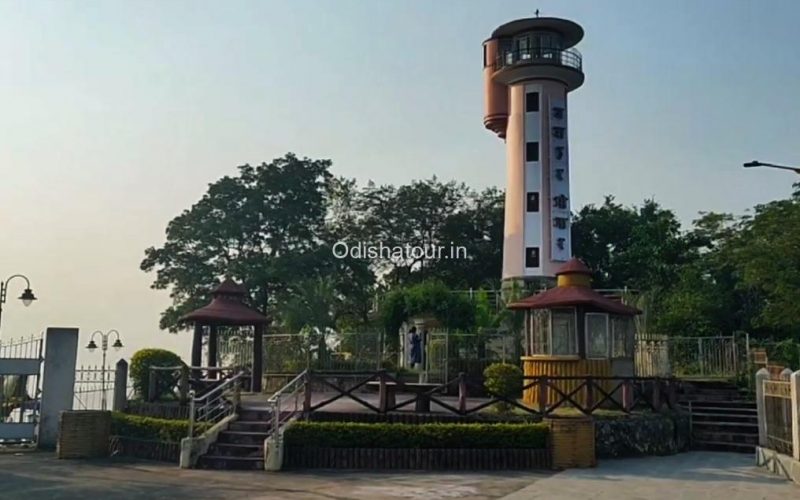 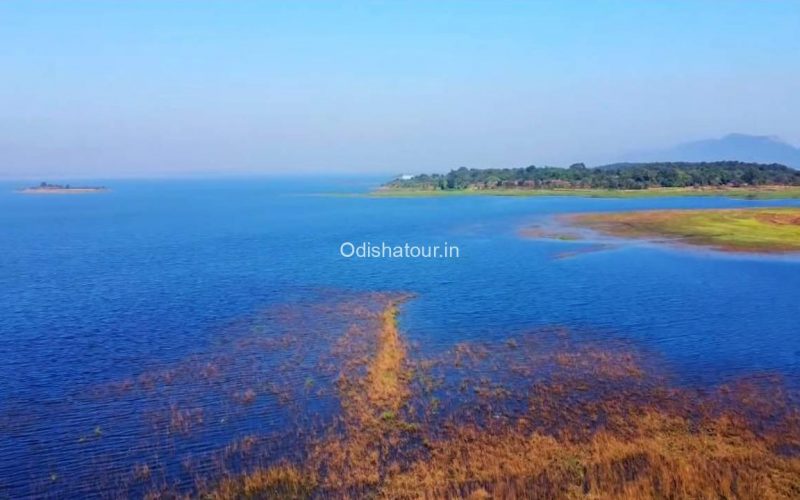 Cattle Island is located near Kumarbandh village of the Belpahar-Banharpali range. It is about 90 km from Sambalpur and 10 km by waterway from Hirakud Dam. Cattle Island has located in one of the extreme points of Hirakud Reservoir, a natural wonder. The island is inhabited only by wildlife and has no human presence. The island is a submerged hill, and before the construction of Hirakud Dam, it was a developed village. During the resettlement period, villagers left some of their cattle behind. When the dam construction was over, the cattle settled on the hilltop. Hirakud dam Cattle Island is a tourist attraction places in Sambalpur.

The deer park is located inside the Sambalpur town. This place is also a zoological park in a sprawling area of 35 acres. There is a small park for children’s to play around in the park. There are several species of Deer, Spotted Deer, Barking Deer to see in the park. It has been recognized as a mini zoo in the city of Sambalpur as it has 288 animals and 20 species of birds. Along with Deer, Birds, Peacocks, parrots, Leopard, Bears are other animals that are the main attraction of this place. It is one of the best places to spend weekends in Sambalpur town. 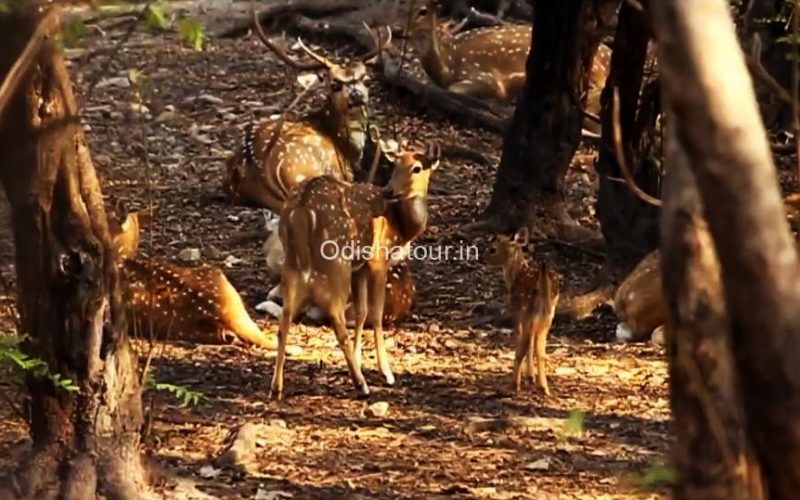 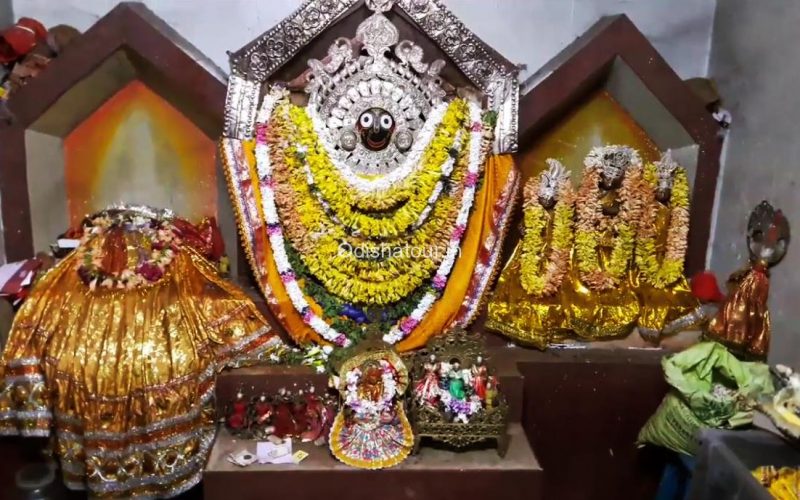 Budharaja temple is situated on a small hillock inside Sambalpur city. The temple is covered with Forest and in the middle of Budharaja hill. There is a Shiva temple located on the top. Lord Shiva is worshipped in this temple. According to locals, the temple is about 600-700 years old and was built by the king of Sambalpur. The Sital Sasthi is a Major festival in western Odisha, so it is celebrated as the main festival in the temple, which day thousands of devotees come here and observe this festival. It is believed that there is a secret tunnel to the temple from here. Budharaja Mandir is one of the most famous temples in the Sambalpur district. 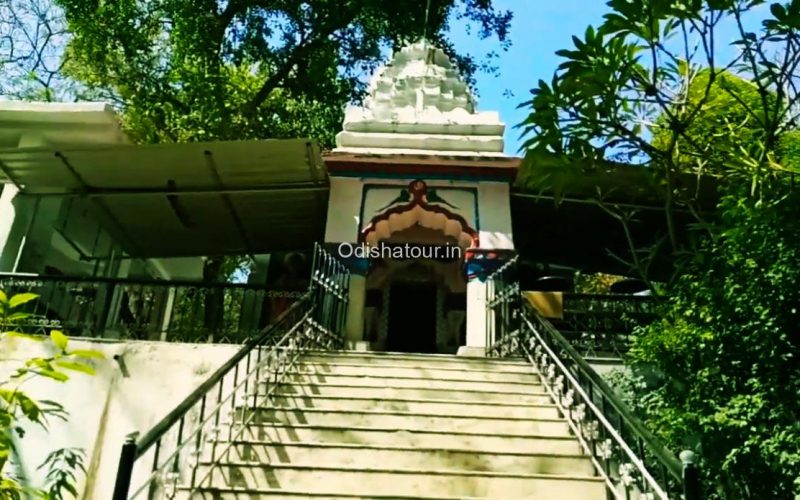 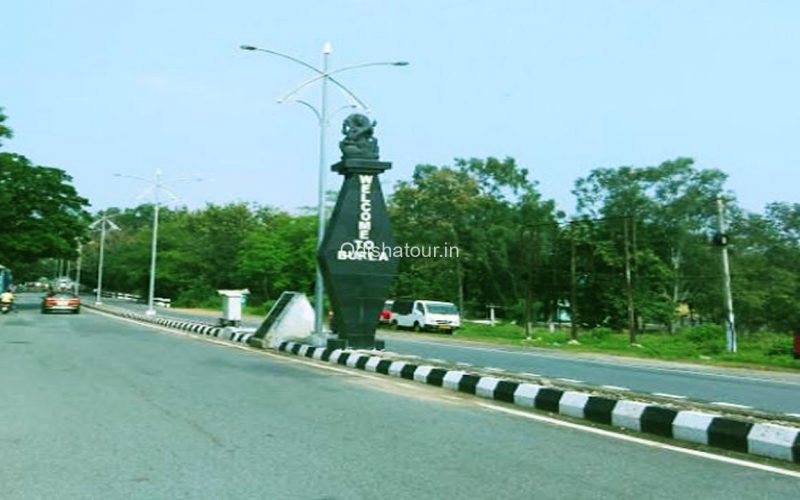 Burla town is 12 km away from Sambalpur. The town is named by a neighbouring village. There is a maintenance office of Hirakud dam, medical college, engineering college and Jyoti Vihar the Sambalpur University which is very near to this township. 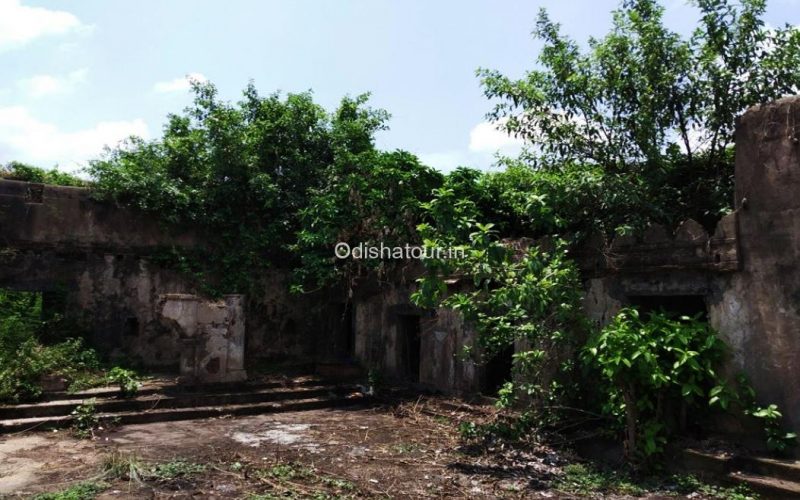