Kendrapara is the district head quarter. it is 60 km form Cuttack via jagatpur on Cuttack Chandbali road. There are many popular tourist place in kendrapara District. One of the famous spot is ‘Bhitara Kanika National Park’, Buddhist Shrines , Udaya Giri, Ratna Giri. Rasabali Mitha (ରସାବଳି )is Kendrapara famous food. This place famous for lord Baldevjew Temple is known as Tulashi Kshetra and also is the most popular temple of the District. Baldevdevjew temple belongs to 9th to 10 century AD,

Sri Balram the elder brother of Lord sri Krishna came to this place form the mountain Lalitgiri and killed the demon kendarasura married his daughter Tulasi on the full moon day of kartika .Therefor the place is called tulasi khetra and popular tourist place in kendrapara. Every year on the day of Kartika Purnima a large number of devotees gather here and worship lord baldevjew. Besides this Ratha Yatra also boserved here and worship Lord Baladevjew. Besides this Rathayatra also observed here with much pump and ceremony. Kendrapada is famous for Rasbali which has been offered to Baladevje. Best tourist places in kendrapara Disrtict

Shri Baladevjew Temple Tulasi Khetra is situated at a distance of 5 km from Kendrapara Town. Here one can see the beautiful temple with other small temples in its side exhibiting the architectural marvel of the ancient Odisha. Lord Baladev is the main deity worshipped in the temple along with his brother and sister. An idol representing Tulasi as Goddess in a seated position is also present after the sacred seven steps. The main Naibedya of Sri Baladev Jew is “RASABALI” which is very famous in kendrapara. Baladevjew Mandir is a famous temple in Kendrapara District. 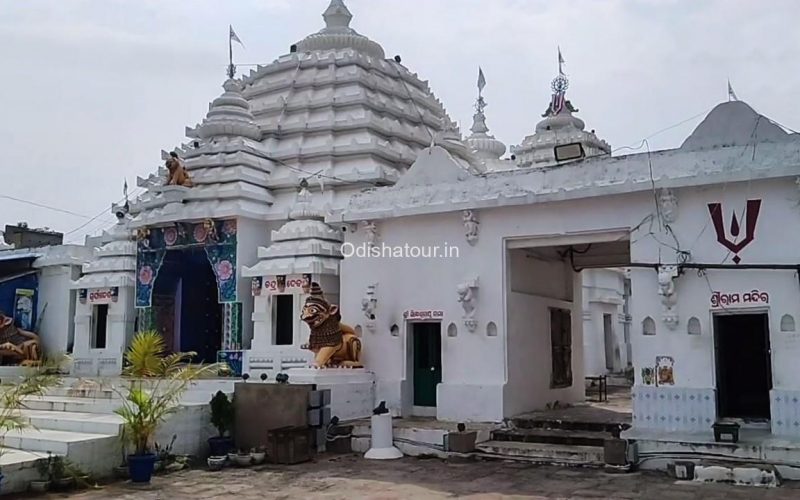 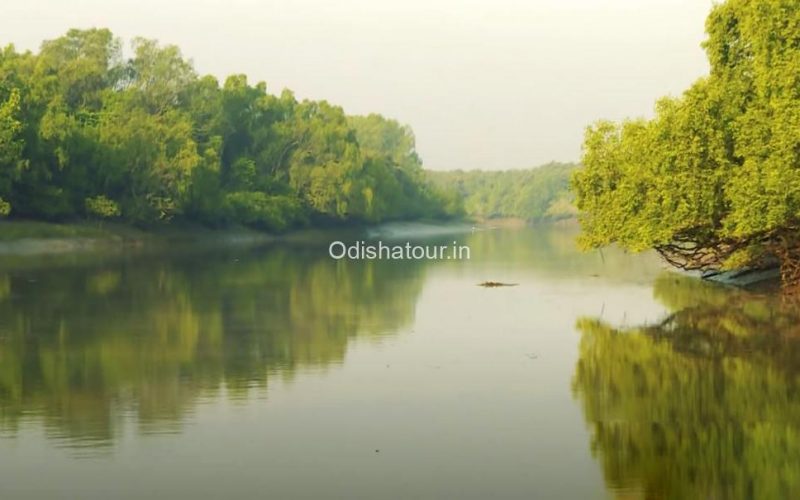 Bhitarakanika is a natural zoo of the wild animal not only in Odisha but in India . The sanctuary and national park 600 sq. km founded by the river in three sides of only the sea in east attract the tourist for crocodile breeding farm at Dangamala and the mangrove forest with exciting flora and fauna Besides a variety of other reptiles like Lizarcic. Pythons and King cobra and also found wildlife of wild Pigs, Rhesus, Monkeys, Sambars, Spotted Dear and many other animals. The Mangrove forests enhance the beauty of Bhitarkanika Park. Bhitarkanika Park and Nature Camp is the Best tourist place in Kendrapara, Odisha. 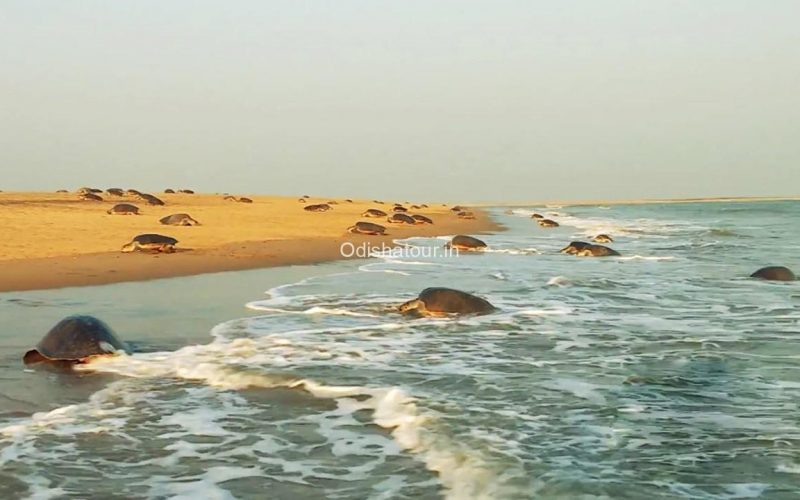 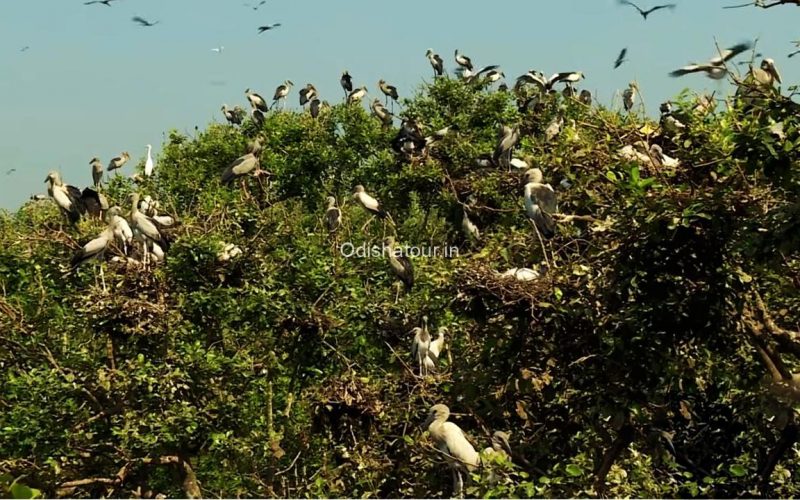 Bagagahan Bird Sanctuary is located inside the Bhitarkanika National Park and is around 85 km from Kendrapara town. Bagagahan is a place of entertainment of varieties of residential birds. There are about 170 species of migratory birds. Birds such as Kingfishers, Sea eagles, Ducks, Seagulls, Darters, Open billed storks and Kites, are mainly seen inside the Bagagahan. Every year native birds from different parts of the country fly to Bhitarkanika to lay eggs. These birds nest and lay eggs in the Guan, Bani, Orua and Kerua trees in the forest near the Brahmani river. Tourists who visit Bhitarkanika National Park also visit Bagagahan Bird Sanctuary.

Habalikhati Sea Beach is located on the coast of the Bay of Bengal, and it is around 16 km from Bhitarkanika National Park and is 86 km from Kendrapara Town. It is famous for the Olive Ridley Sea Turtles Research Centre. A beach resort surrounded three sides by forest for you alone. It is also enjoyable with crocodiles and mangrove forests on the riverbank. The sea beach is surrounded by forests on three sides. Many tourists come here to visit and enjoy the Beach in the winter. There is a Habalikhati Nature Camp near the Habalikhati Beach. It is also the best picnic spot which attracts visitors for its beautiful seashore. Habalikhati Sea Beach is one of the most popular tourist places in the Kendrapara District. 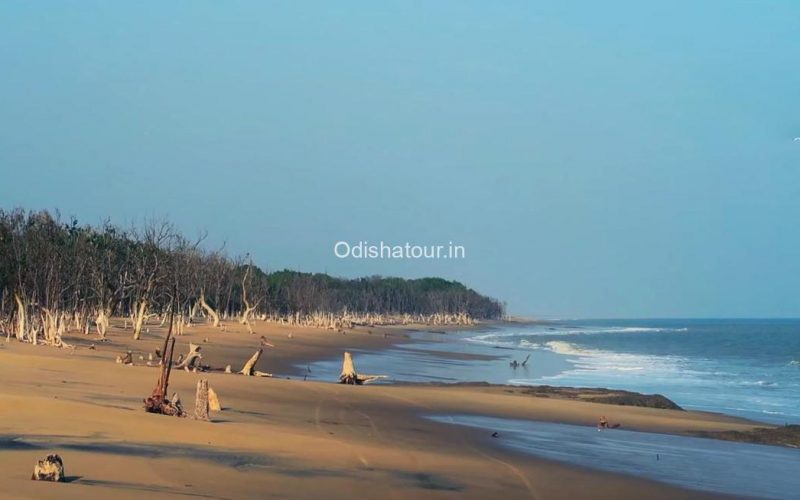 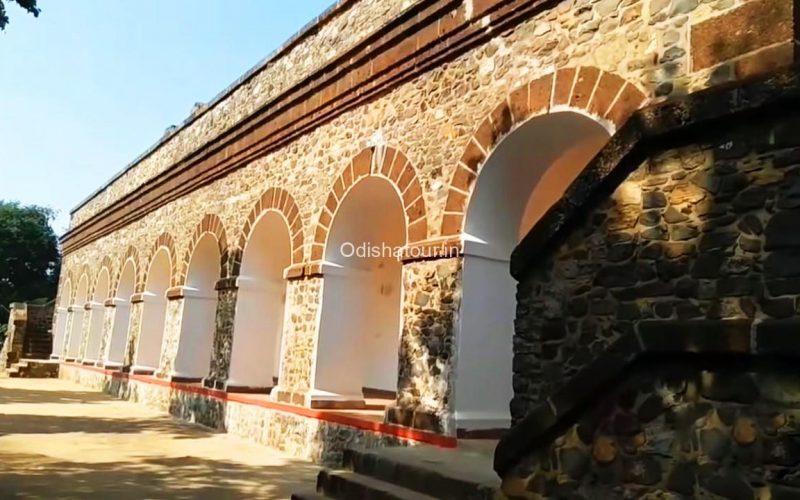 Hukitola is located on Jambu island in the Bay of Bengal of Mahakalapara Block in Kendrapara District. This building was constructed in the year 1865-66 under the supervision of Chief Irrigation Engineer Hokkey Walker on an elevated land strip in the island for the purpose of food and water reservoir for supplying to various places nearby to cater to the need of people by the Imperial Government during the period of famine in Odisha. It was strengthened on all four sides by boulders. The building which represents European Renaissance architecture has a plinth area of 7000 sq. ft. Hukitola Jambu island is the best tourist place in Kendrapara, Odisha

Kanika Palace is situated in Rajkanika Block and is around 50 km from Kendrapara Town. Rajkanika Palace is a massive palace constructed by the King of Kanika, Rajendra Narayan Bhanja Deo. There is a museum inside the Kanika Palace, where one can see the king’s war equipment and the world’s Largest crocodile skull. Another attraction of an elephant skull, foot and stuffed tiger museum that attracts tourists. The palace has surrounded by two big rivers called Kharasrota and Baitarani. Tourists from all over the state and beyond come to see the palace. Raj Kanika Palace is one of the most popular tourist places in the Kendrapara District. 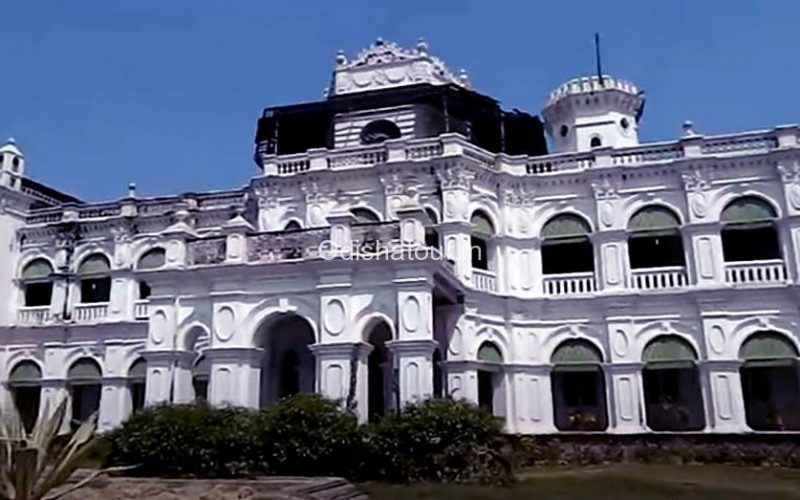 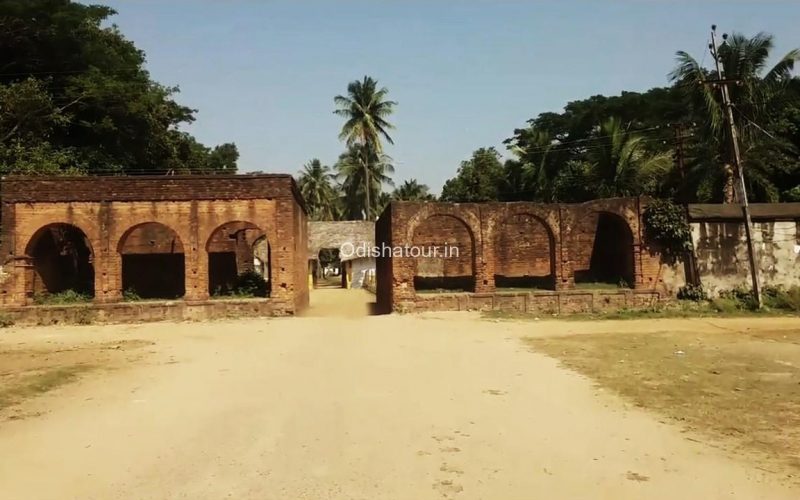 Aul Palace is located on the banks of the Kharasrota River and near Aul township. It is about 37 km from the Kendrapara district headquarters. The Aul Palace was built in 1590 by Kalinga Raj Ram Chandra Dev. It is an ancient palace spread over 40 acres of land. Other structures like Rajbati, Ranimahal, Ghodashala, Bhandar, Udyan, Pramoda Udyan, Debalaya, Devi Mandir are included in the palace. The Rajkanika Palace is around 8.5 km distance from the Aul Rajabati.

The Matia Mangala temple is located at a distance of around 8 km from the Rajnagar. The goddess Mangala presiding deity of local and abroad Matia Mangala is 47 km distance from Kendrapara. The people of the area have a great belief in the goddess. The environment of the place is very calm and quiet. Throughout the year devotees from different parts of Odisha come here to worship goddess Mangala. Pana Sankranti is the famous festival of this temple. Matia Mangala Mandir is a famous temple in Kendrapara, Odisha. 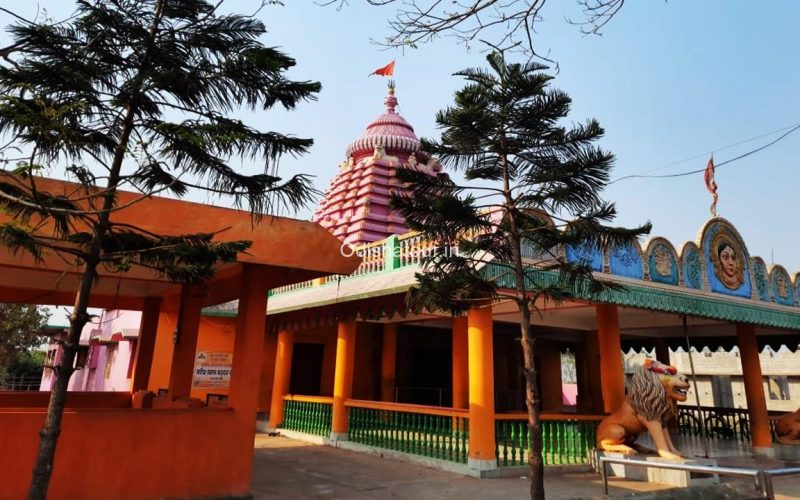 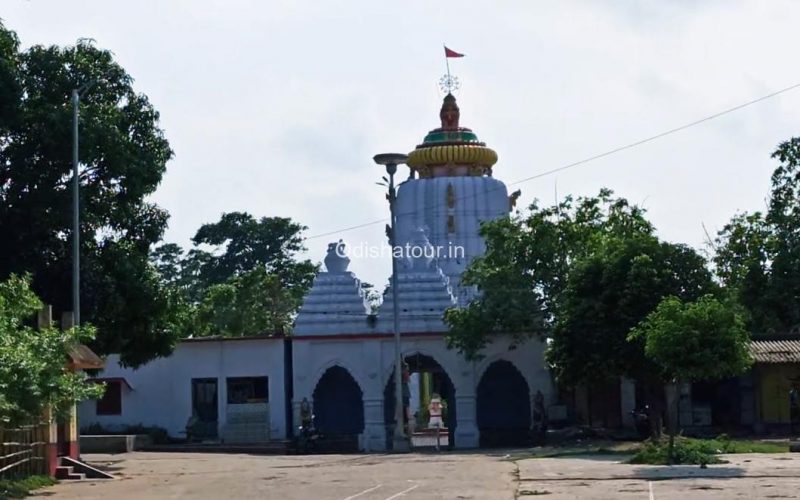 Sri Lakshmi Varaha Swamy Temple is a 500-year-old Indian temple dedicated to Varaha, the boar incarnation of Vishnu. The temple is located in the Indian state of Odisha, in the Kendrapara District. Brahmani River is the nearest river. The King of Aul was a devotee of Sri Lakshmi and Varaha. The Lord was situated in the Maa Biraja Pitha in the Jajpur District, along with Yajna Baraha Temple and often went there to offer Puja. The present Lakshmi Varaha Jew Temple was renovated by the late king of Aul, Sri Brajasundar Dev during the 20th century after the temple had been in a ruined state for the previous 500. Lakshmi Varaha mandir is a famous temple in Kendrapara 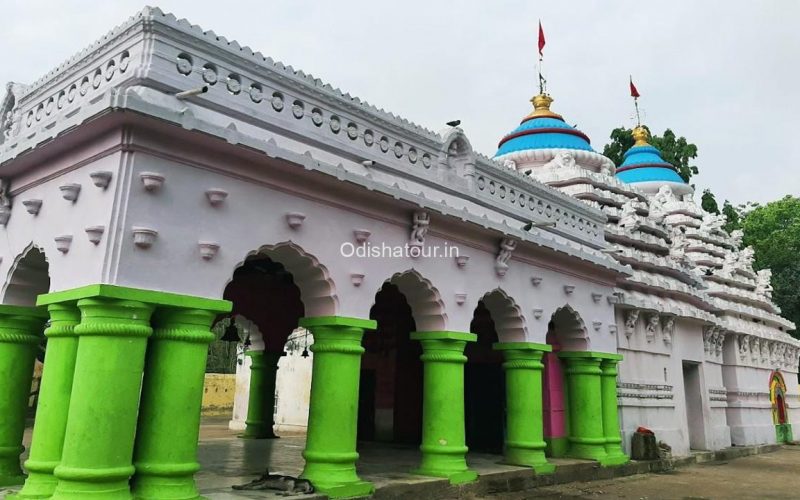 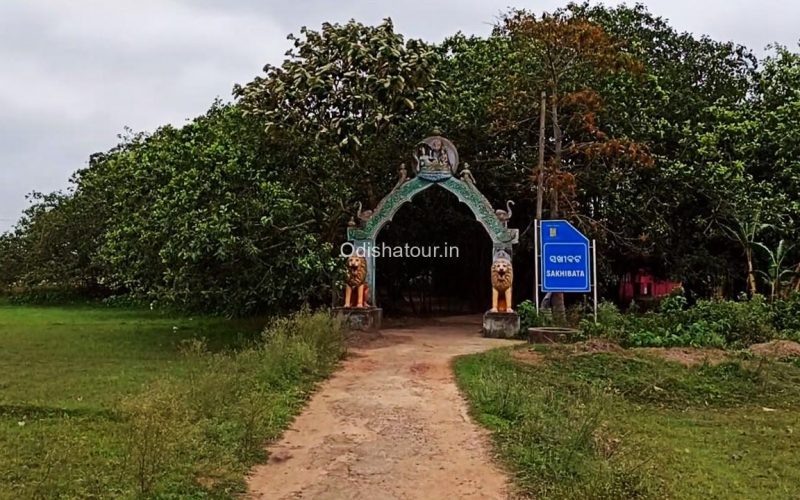 Sakhibata is a 500-year-old banyan tree which is situated at Sakhibata, and it is only 6 km from Kendrapara town. Main attraction of  this place is Big Old Banyan tree. The large tree spread across 1.3 acres of land with about 600 trunks and sub-trunks, has been granted tourist spot status by the state government following visits of tourists in the area throughout the year. A 500-year-old temple is still intact on the spot, a reminder of the historic importance of the place. This ancient temple is associated with mythology. Sakhibata Temple is of the most popular famous Temples in Kendrapara,  Odisha.

Sialia village under Rajkanika Tehsil of Kendrapara There is no doors in the houses and the entire village. And still, thefts do not occur here. The prime deity of the village is Goddess Kharakhai. The temple of the village deity Goddess Kharakhai is at the north end of the village. There is no roof in this temple as people believe the Goddess loves to remain under the open sky so that sunlight falls on her. In Odia, the meaning of Kharakhai means the one, who enjoys the sunlight. Perhaps that is the reason Goddess Kharakhai temple does not have a roof. People believe it is the blessing of the Goddess which makes them safe from theft. Hence no doors are required in houses of this village. 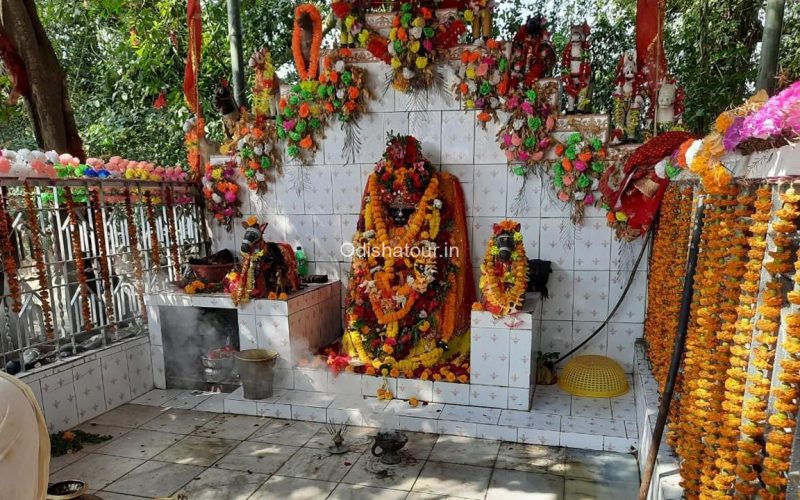 The Pentha Sea Beach is located 10 km distance from Rajnagar and 50 km from Kendrapara Town. There are Mangroves and dense pine trees that create the scenery attractively mesmerizing and charming. The roaring waves hitting the shore of the Bay of Bengal is mind-blowing and One of the best neat and clean beaches of Odisha. On the Seashore, crystal clear water, the tress and the beautiful red crabs. The world-famous Bhitarakanika national park has situated nearer the beach. Penta beach is one of the Best Beaches and tourist places in the Kendrapara, Odisha

Maa Gojabayani Temple is located At Baghadia, and it is about 7 km from Marshaghai Market and 19 km from Kendrapara town. Goddess Gojbayani is worshipped in this temple. The Jammu Jatra on the occasion of Pana Sankranti is the main festival of Maa Gojabayan, A large number of devotees come to see the festival. Every Tuesday and Thursday are the main days of Maa Gojabayani, which day devotees come to worship and offer Nonveg(Macha Ghanta). Devotees believe that the Goddess fulfils their wishes. Gojabayani Temple is a tourist place in Kendrapara District, Odisha. 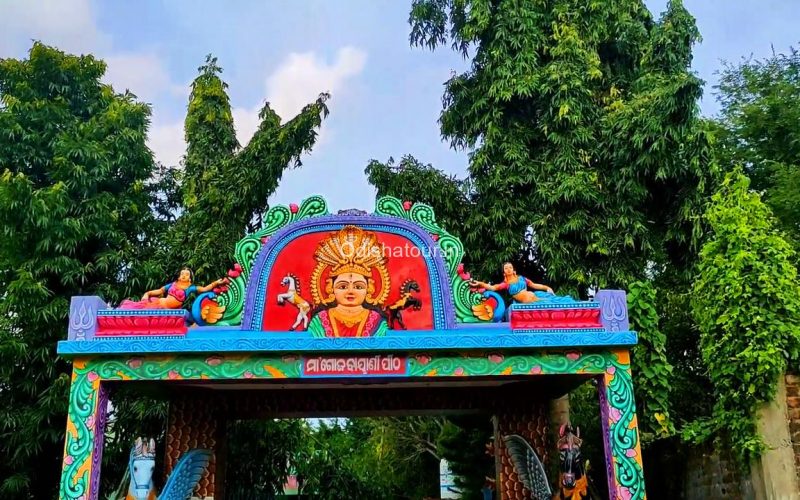 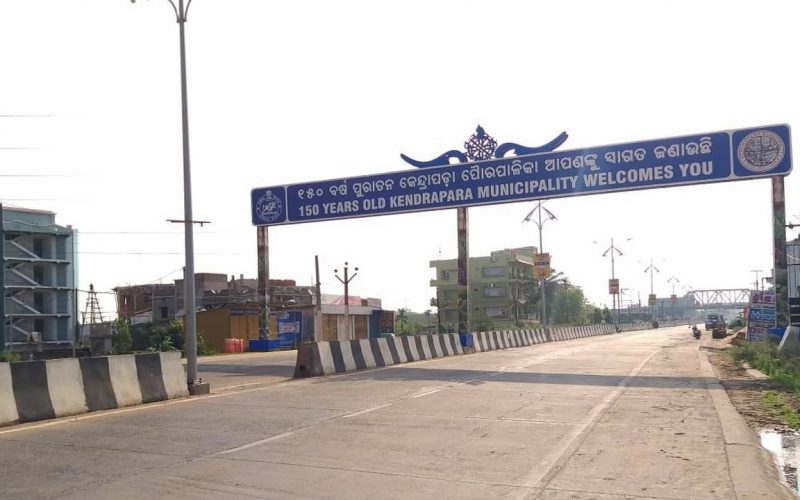 Badakotha is an old building near the Kendrapara bus stand. Once upon a time, Badakotha in Odisha only indicated to the 2 stair building of Radhashyam Narendra. Khankira waterfall is located at Chandikho near Kendrapara. Best tourist places in kendrapara

Ekakula is a unique island in the Kendrapara district. There is a beautiful Sea beach called Ekkula, which is located on the shores of the Bay of Bengal. It is around 90 km from Kendrapara town and 13 km from Bhitarkanika National Park. To reach this island, you have to go by boat. The sunrise and sunset at this beach are very pleasant for the tourists. It is also the best picnic spot which attracts visitors for its beautiful seashore. Ekakula Sea Beach is one of the best tourist places in Kendrapara district. 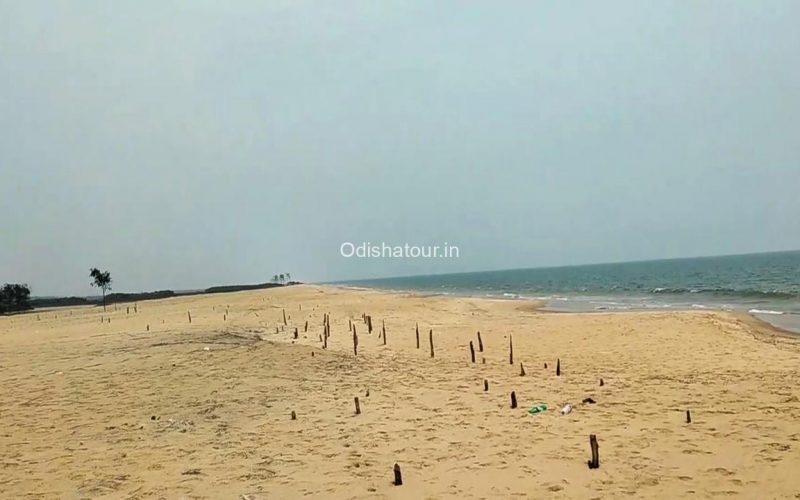