Ganjam is the name derived from the village Ganja is called Ganjam. It is one of the coastal and Hilly District of Odisha. The entire region is filled with hills, forests, waterfalls, rivers and Valleys. Chilika lake extends to the northeastern part of the headquarter of Ganjam is Chhatrapur, which is 20 km from Berhampur on the road to Bhubaneswar. Mainly Telugu and Odia communities are the inhabitants of the Dist and a few tribal sects.

Taratarini is a religious place situated 35 km away from Berhampur and 25 km from Chhatrapur. It is a hilly place covered with dense forest. There are twin-seat of the goddess on the top of the hill in the village Govindapur which is connected with 999 steps from the ground .besides this there is memorable road approaching the shrines. 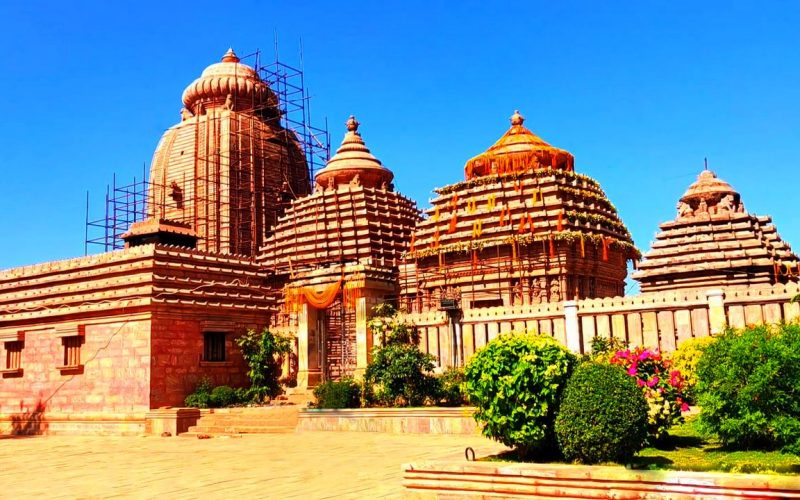 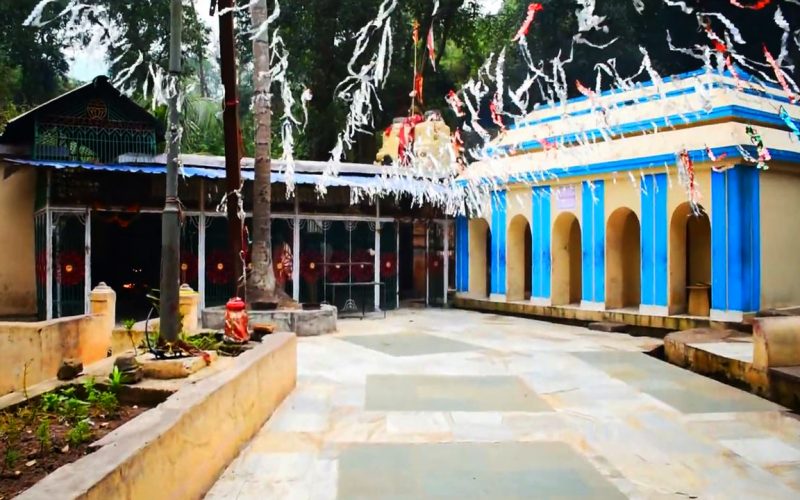 Narayani is a Saktipitha and situated 15 km away From Rambha towards north on the way to Bhubaneswar. It is a hilly place surrounded by Ashoka trees. The temple of Goddess Narayani is on the top of the hill.

Nowadays Gopalpur is a seaport and 16 km away from Berhampur town. It is a sea beach resort and charming place. Nearby the sea beach many star hotels which provide accommodation to the visitors. Best tourist Places To Visit In Berhampur 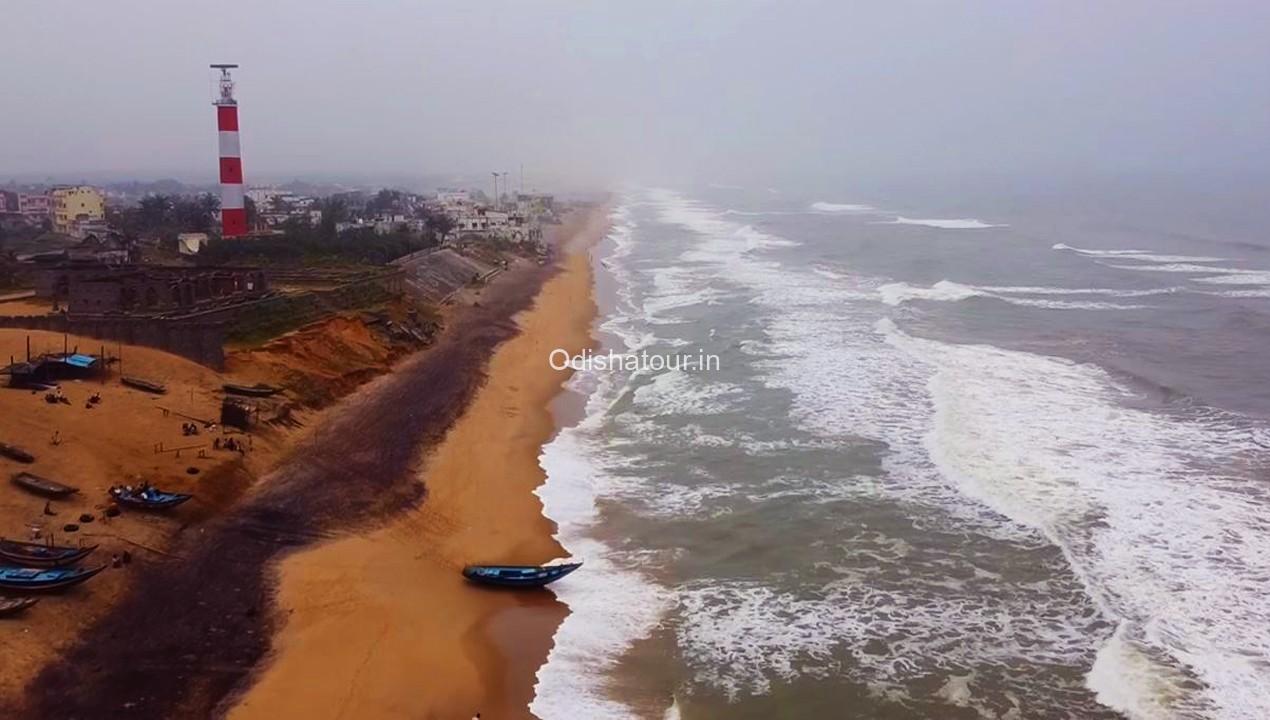 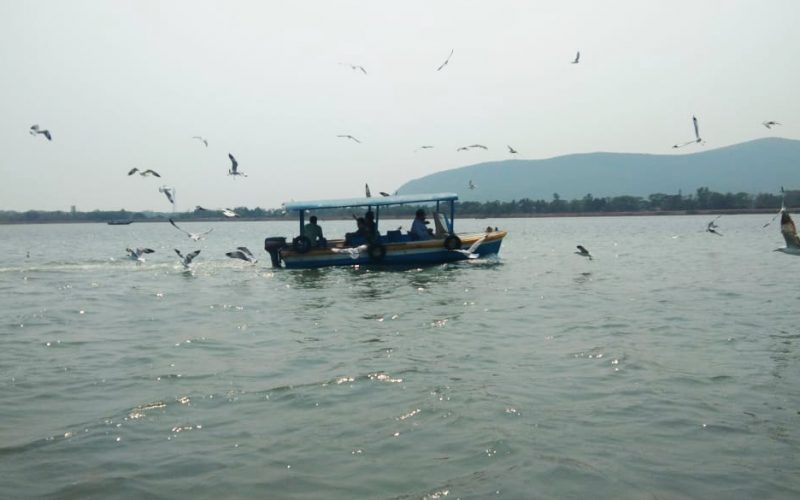 Rambha has situated 45 km from Berhampur on the side of the Chilika Lake. It is an old town and was rest resort of the then king of Khalikot. From this place, one can see the scenic beauty of lake Chilika which is very enjoyable. Besides this lunch and country boats are available for cruising in the Chilika Lake to enjoy the sight. Best tourist Places To Visit In Berhampur

Nirmaljahr is only 10 km from Rambha and 120 km from Bhubaneswar. It is a hilly place having a perennial waterfall which creates a pool of crystal clear water. The natural scenery of this place is attractive and enjoyable for the visitors. It is also a religious place of Khalikote area. There is a statue of Lord Vishnu 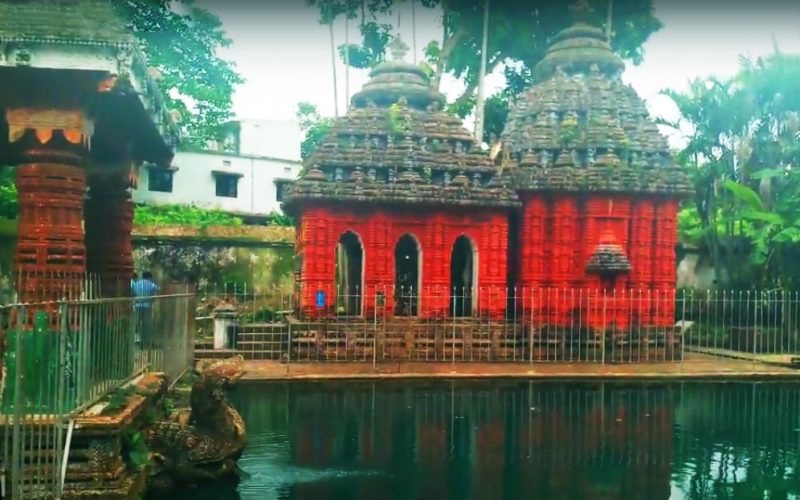 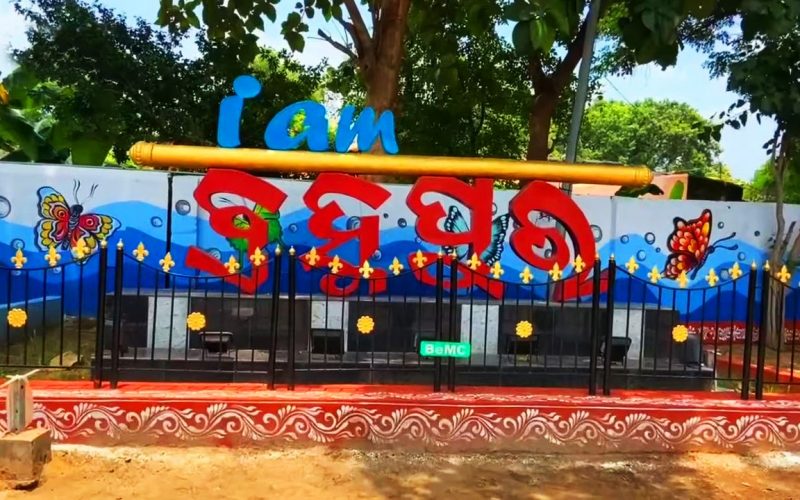 Berhampur has situated 180 km from Bhubaneswar and old commercial town of the state. one of the Odisha’s largest cities. It has been nicknamed the Silk City by some because it is famous for its silk saris. It is connected with the South East Coast railway line. The southern Revenue Division at the state and other divisional office is also located at Berhampur. The town is famous for silk fabric and brass wears.

Mahuri kalua Temple is a Sakta Pitha of Ganjam district. It is 17 km away from Berhampur town towards the northwest. Goddess Kalua or kali was worshipped by the king of Mauri during Mahuri Dynasty. It is a very beautiful place for visitors and picnickers. Throughout the year devotees came here to worship goddess Kalua. Durga puja and Kalipuja are the famous festivals of goddess Kalua 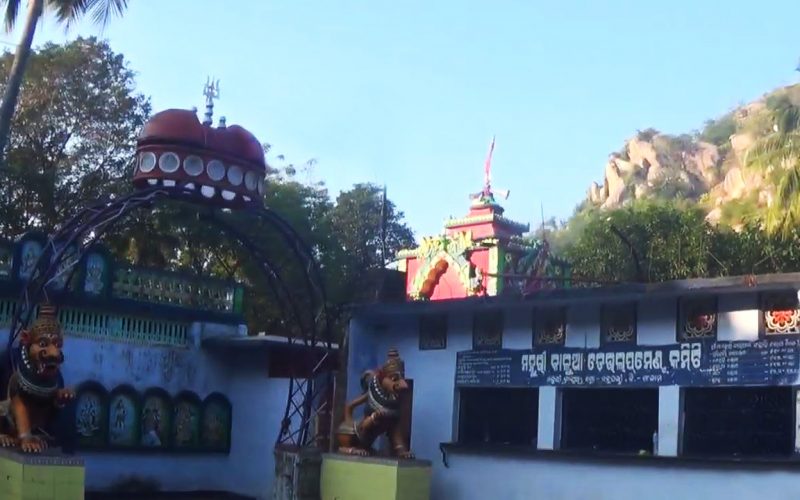 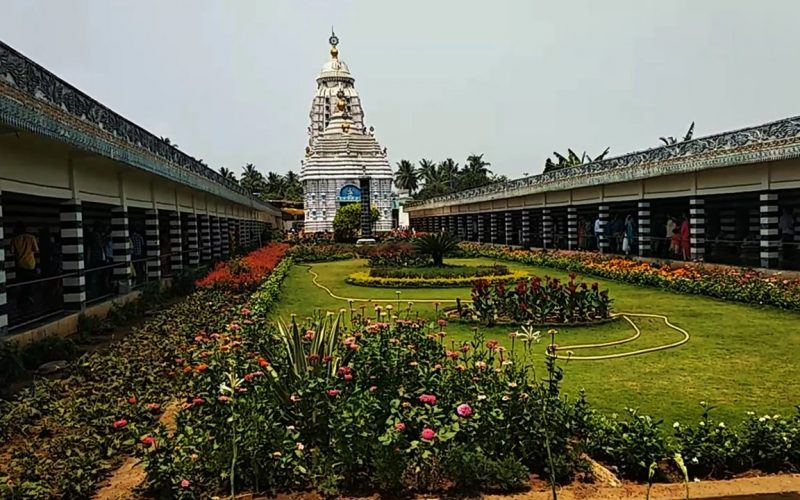 Siddha Bhairabi is a tantric Pitha of Ganjam district. It is situated 15 km away from Berhampur town towards south on road. It is a famous spiritual place of the locality. There are 108 temples having different god and goddess around the temple Siddha Bhairab.which is more attractive to the place.

Jaugada Fort is a famous historical place of Ganjam district in Odisha. It is situated 50 km away from Berhampur. It is a land of history remains having ancient forts and a place for research. Locally believed that it was a built by Druyodhan of Mahabharata having five stone images of five Pandavas. 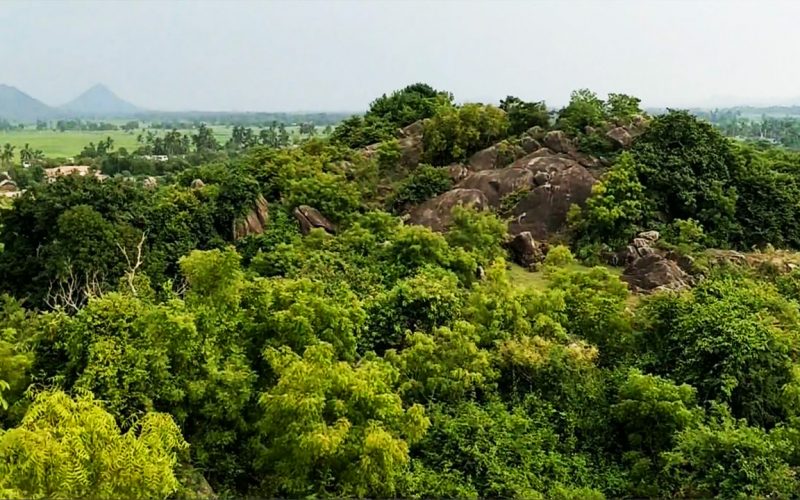 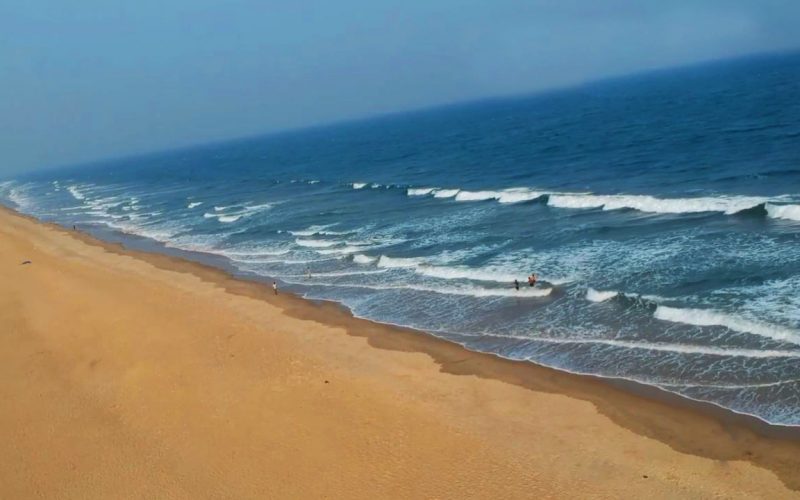 It is 30 km away from Gopalpur sea beach. A virgin beach awaits here for the visitors. The beach down south of Gopalpur across the river Bahuda on the border of Andhra Pradesh offers peace and tranquillity to all the visitors going there to relax and spend the leisure.Best tourist Places To Visit In Berhampur

Aryapalli is situated 6 km distance from Gopalpur Beach and 31 km from Berhampur. The confluence of the river Rushikulya and the sea. Aryapalli is a place of tourist interest. It is a very nice, beautiful, neat and clean beach. The sunrise and sunset at this beach are really very pleasant for the tourists. 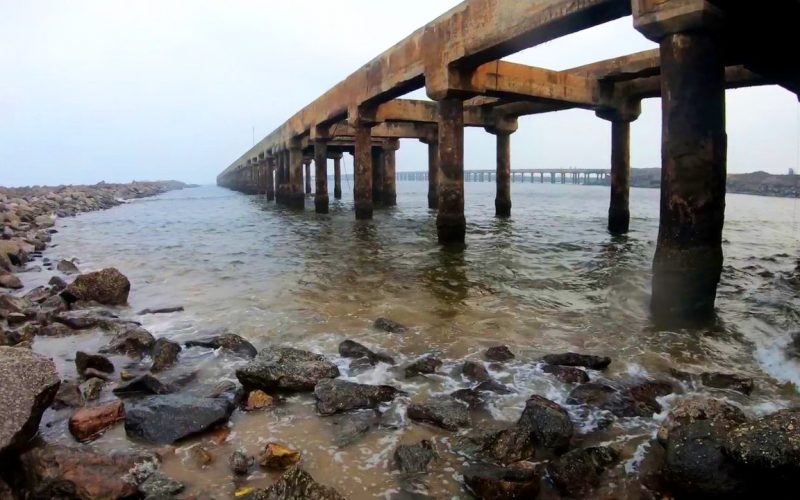 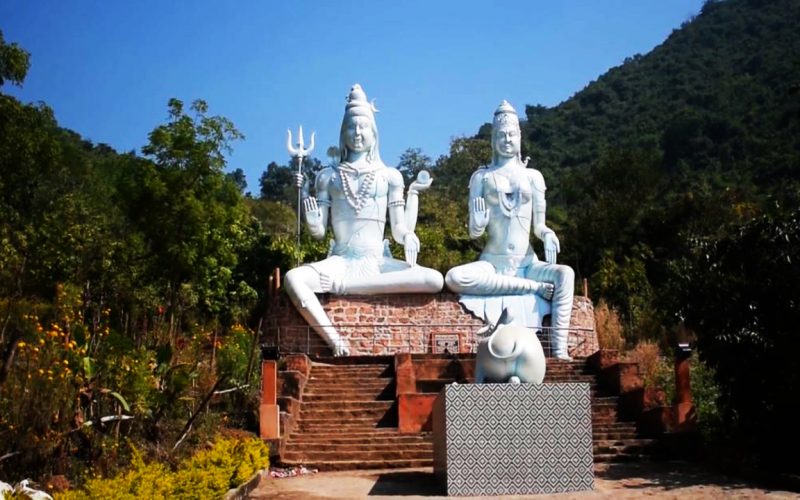 This picturesque hill is situated at a distance of 3 km away from Buguda Tahasil. The temple of Lord Siva and a natural spring attract the tourists. A Shiva temple which is located above on the mountain.

Siddhi Vinayak Temple and Lord Ganesh temple has situated at Panchama village Near Berhampur Town. Lord Ganesh is worship by People also called Bata Ganesh in Siddhi Vinayak Temple. Here the lord resides in the groove of a large Pipal tree. A big gathering takes place on Ganesh puja day. A small Garden is there inside the temple. Besides this, the temple of Shiva and Hanuman temple is here and worshipped by the local people 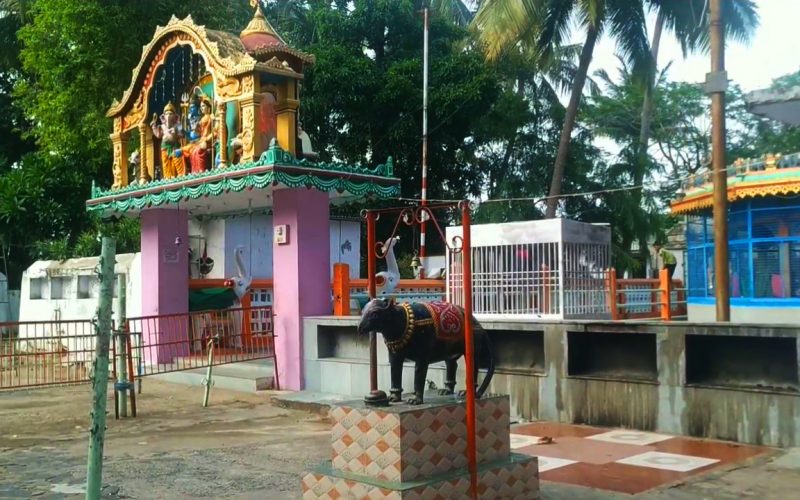 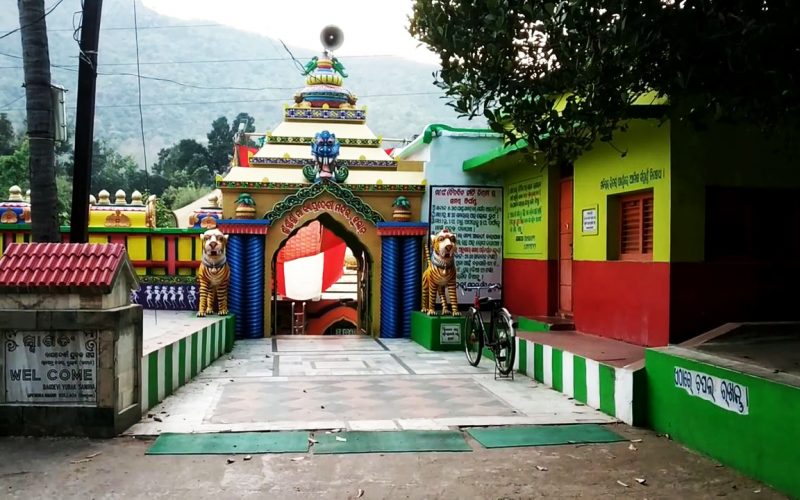 Byaghradevi Pitha is a religious place situated 8 km from Bhanjanagar 79 km away from Berhampur. A temple dedicated to goddess Byaghradevi situated on a hilltop attract to pilgrims.

Singhasini Temple has situated around 70 km from Berhampur. It is surrounded by dense forest. It is the Pilgrim centre of south Odisha. A temple dedicated to goddess Singhasani attracts the tourists. Raja Sankranti and Durgapuja is the main festival of Maa Singhasini. Every year thousands of devotees come here to see the Festival. It is an attractive place for visitors. 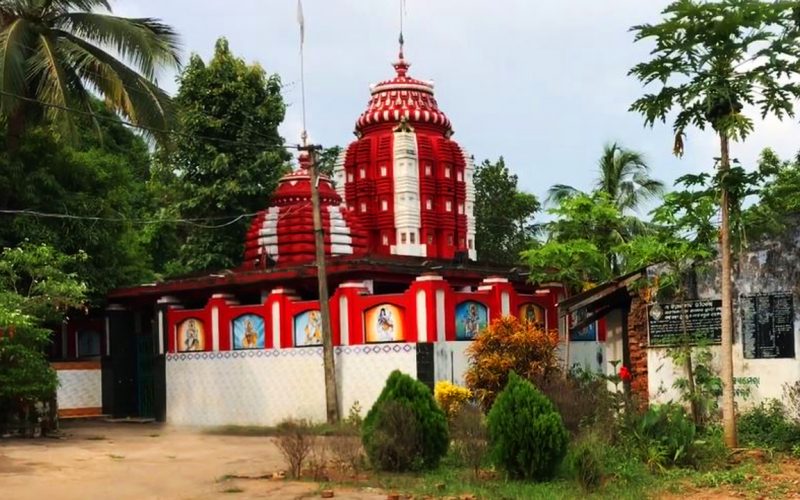 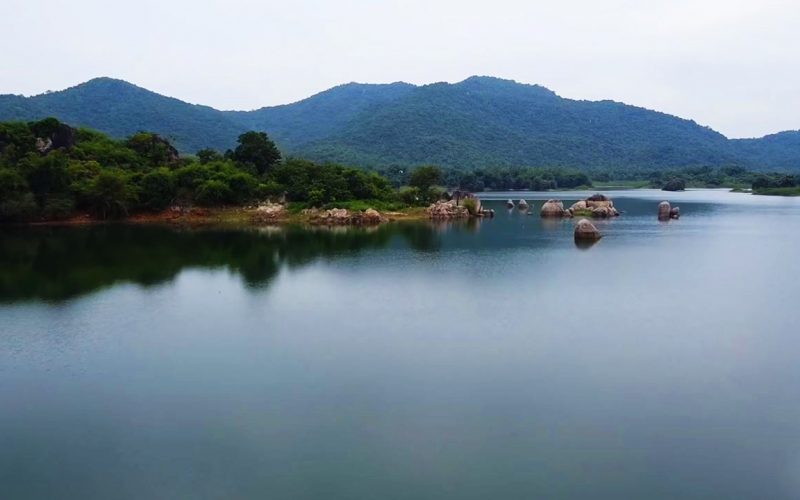 Ghodahada Dam is situated at a distance 60 km away from Gopalpur beach and 47 km from Berhampur. It Ghodahada Dam with reservoir attracts a good number of picnickers round the year. There is a Shiva Temple in the dam. The sunrise and sunset at this beach are really very pleasant for the tourists. Best tourist Places To Visit In Berhampur

Lakhs of endangered Olive Ridley turtles flocked the Rushikulya river mouth for their annual mass nesting in Odisha’s Ganjam district. These endangered species flock the place every year from the third week of February to the first week of March for nesting. Odisha is the largest mass nesting site for Oliver Ridleys in the world. 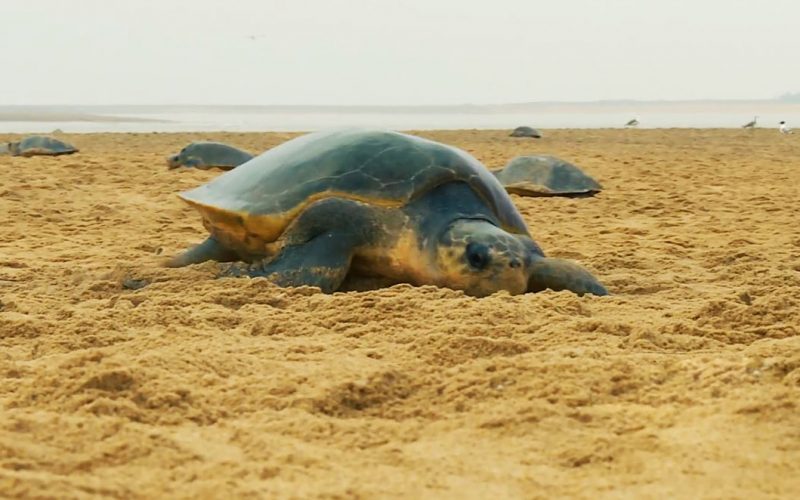 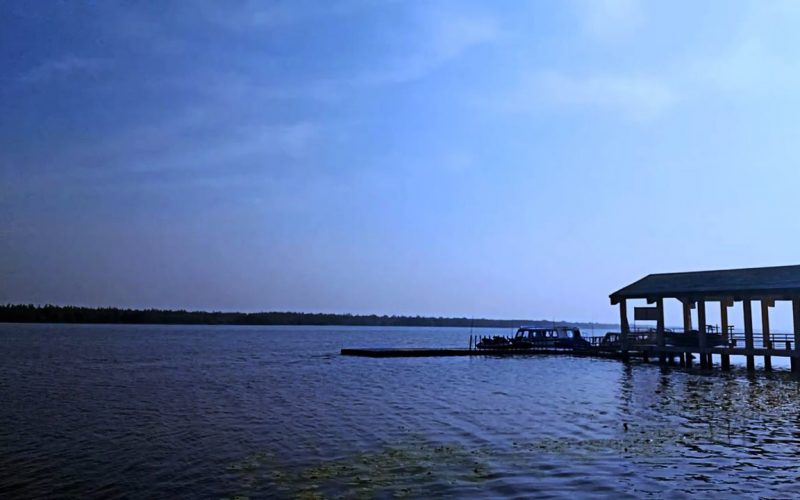 Tampara Lake is one of the largest freshwater lakes in the State. The beautiful lake & the nearby Chilika Lagoon highlight the ecological diversity Odisha is blessed with. While Tampara is a freshwater lake, Chilika is a brackish water lagoon. The fact that Tampara is mostly secluded adds to its novelty

Dharakote Temple is a Jagannath temple located in Odisha. It is similar in many ways to the Puri Temple. It is known among locals for the Ekadasi Cart festival. Dharakote is located about 12 km north-west of the Rushikulya river, Aska, Ganjam, and is 55 km from Brahmapur, the “Silk City.” 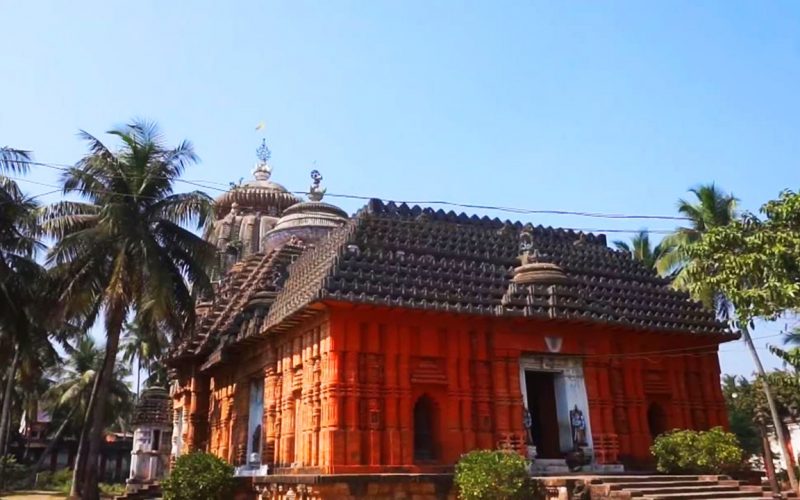 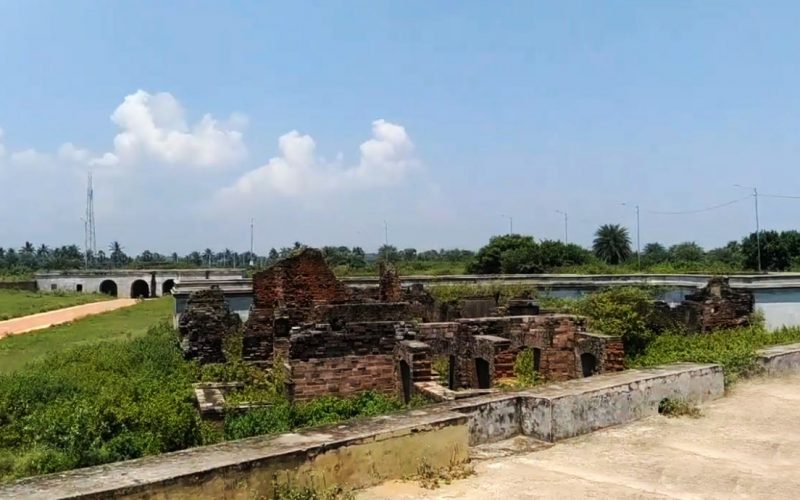 The fort of Potagarh was the first Collectorate complex of Ganjam. Later on, it was shifted to Berhampur in 1815 and subsequently to Chhatrapur in 1835, where it is continuing till today. Potager or the “buried fort” is named as such since it is buried. It is situated at present near a village named Ganjam between 180 15′ and 200 15’N. Latitude and 830 49′ and 850 15′ E. Longitude on the mouth of river Rushikulya.

It is about 50 km away from Berhampur Town. A little island is located in the middle of Chilka Lake surrounded by water. It can be easily visited using a boat and is an ideal place for a picnic. It is a place of entertainment of varieties of residential birds. Many types of birds migrate here from different parts of the world during the winter season. The place is very beautiful and attractive to visitors. 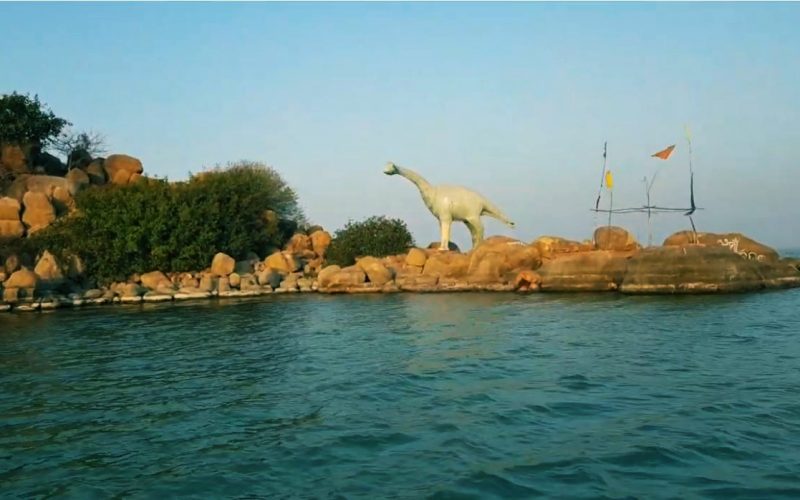 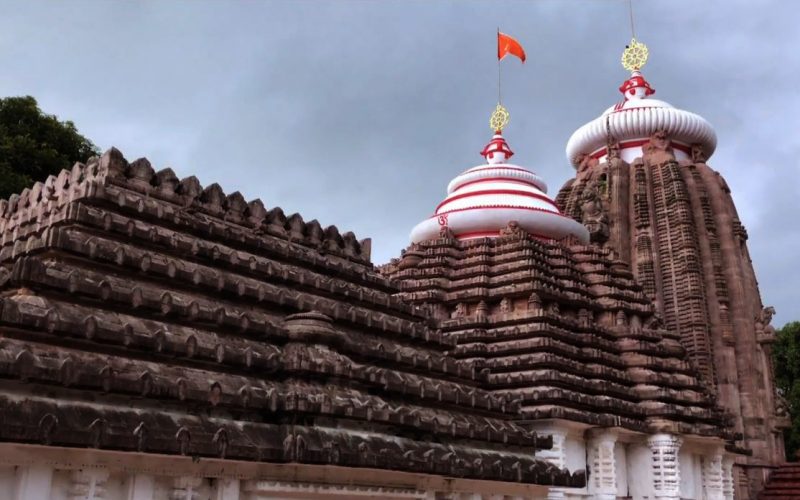 The Jagannath Temple has situated 48 km away from Berhampur. From the seventh Parichheda (chapter) of Gangavamsanucharitam, the Champu, a historical Kavya written by poet Vasudeva Ratha Somayaji of Athagada in Ganjam in 1762 A.D., it is known that Raghunatha Harichandan, Raja of Athagada 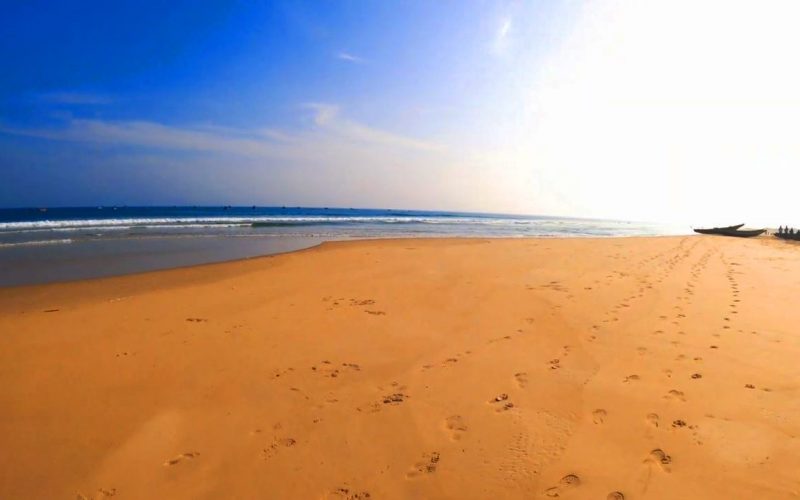 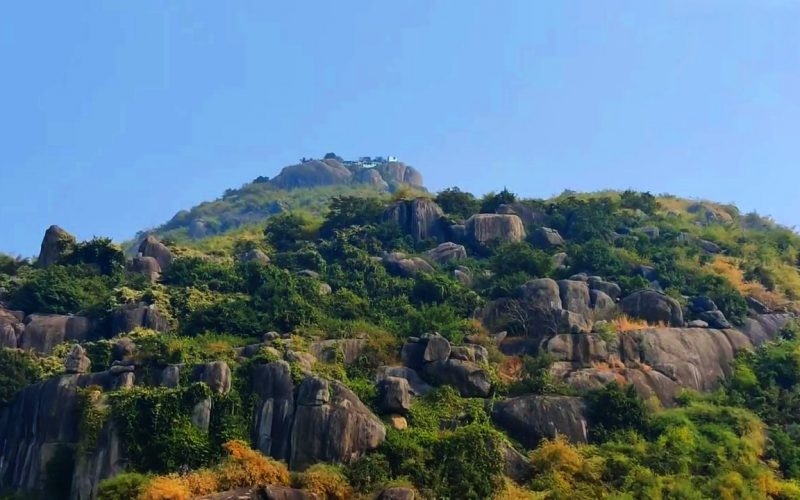 Balakumari temple has situated 9 km from Chikiti and 37 km from Brahmapur in the District of Ganjam. Maa Balakumari is worship on the top of the Kerandimala mountain. Devotees have to climb 1240 steps to reach the top of the temple. Durga Puja, Navaratri and every Sankranti is an important festival celebrated at the temple. There is a Shiva temple and a big Shiva Linga located at the foothills of the Balakumari temple.

Baghalati dam is a Large irrigation and fishing project from the Bahuda River. The dam has located around 10 km from Khairaguda and 60 km from Berhampur, Ganjam. Maa Krunasini Temple is a famous Shakti Pitha, which has situated nearby the dam. Baghalati dam is one of the best tourist places in Ganjam, Odisha. The Baghalati Dam has surrounded by mountains and green forests. The Beautiful natural atmosphere attracts the visiter and picnic rush the spot during winter 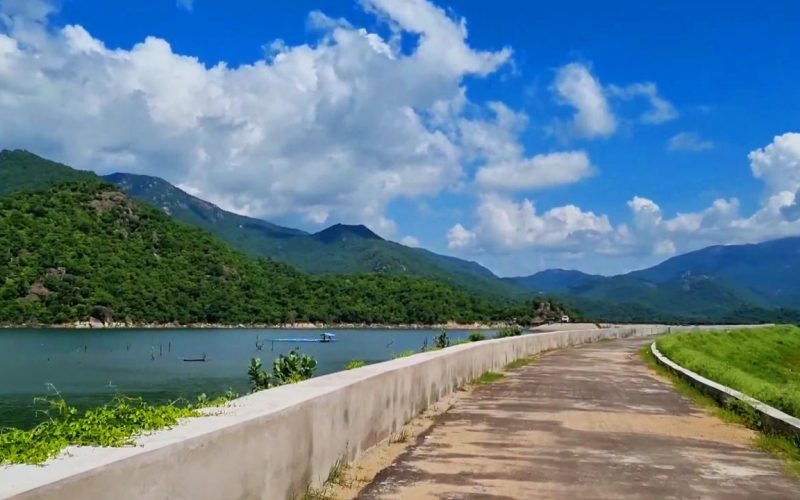 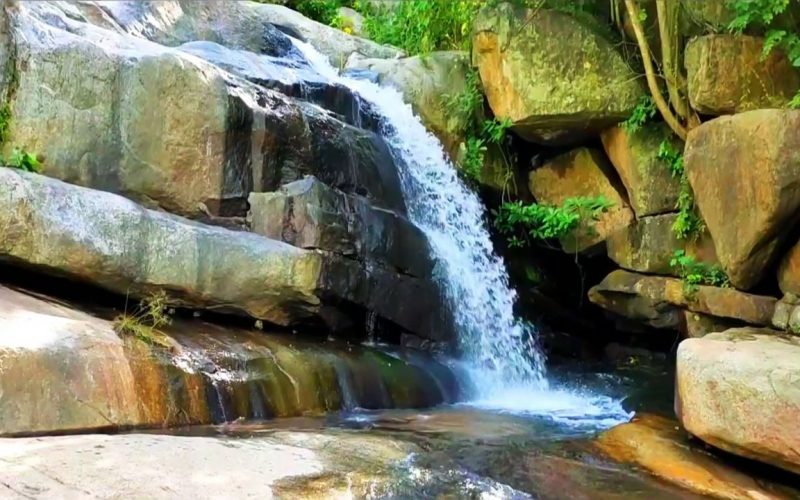 Ghusuridanga Waterfall(Ghusuridunga) has located at Sagadabasa, and it is 5 km from Badagada Gram Panchayat and 17 km from Surada and 65 km from Berhampur. The water of this waterfall flows through spring from a hill. The Ghusuri Danga waterfall is surrounded by hills and dense forest. This waterfall is a great place for picnics and group parties. Winter is the perfect time for tourists to come here. It’s easy to get to this waterfall. Ghusuridunga Waterfall is one of the most popular tourist places in the Ganjam District.

Surada Dam Ghai has located 23 km away from Dharakote and it is 75 km from Brahmapur Town. Sorada Dam has surrounded by mountains and green forests. It is interesting to see the beauty of the dam at sunrise. The Surada Dam Reservoir is built on the Rushikulyas River. A new jetty, Biju Minar and a beautiful park have been constructed here by the Government of Odisha near the dam for tourists, Which is known as Biju Patnaik Picnic Spot. Best tourist places to visit In berhampur 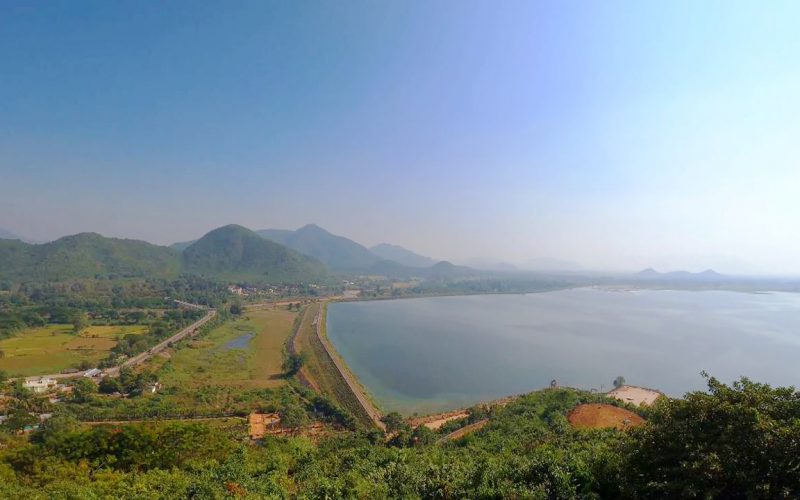