Nayagarh is 88 km distance from Bhubaneswar and 60 km from Khordha. Previously it was ruled by the king of Nayagarh till 1948 before the merger of the state, but now it is a new district having headquarters and one subdivision. Two mountains called Rukhi and Balaram are standing on both sides of the town, which look very beautiful. The lord Jagannath and Goddess Dakshina kali are the presiding deities of the town. Besides this Gopinath temple in front of the Dakshina Kali temple and an ancient Matha on the south side of the Jagannath temple attract the visitor for culture and serenity. Nayagarh district is famous for Kantilo Nilamadhaba, Ladu Baba Temple, Kuanria Dam, Similipal Waterfall, Raghunath jew Temple, Maninag Temple, Satkosia Gorge, Suanmuhin Dam

Kantilo Nilamadhaba Temple is situated on the bank of the river Mahanadi and at a distance of 25 km from Nayagarh & 100 km from Bhubaneswar. It is famous for Lord Nilamadhaba as well as brass utensils. The temple of Lord Nilamadhab stands majestically on the top of the twin hills, just towards the right side bank of the river Mahanadi. In addition to Lord Neelmadhab, the temple premises include Kashi Vishwanath, Maa Bimala, Maa Laxmi, Lord Jagannath, Balabhadra, Goddess Subhadra and Rohini. Kantilo Nilamadhaba Temple is one of the Best Tourist places and famous temple in Nayagarh, Odisha 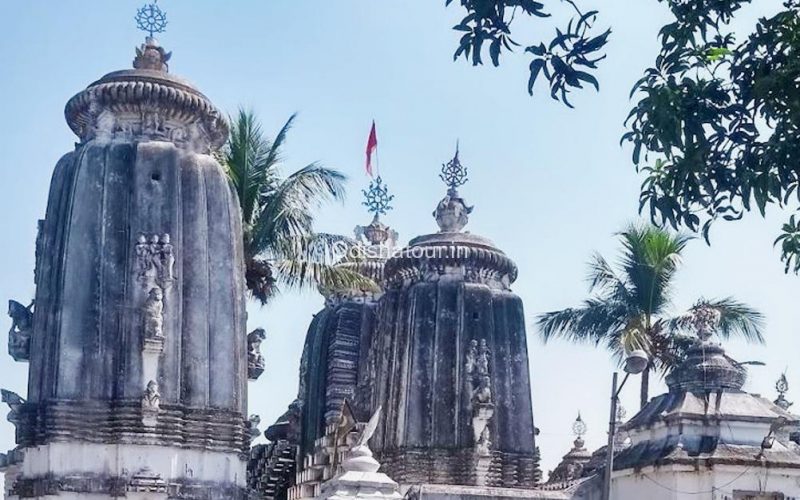 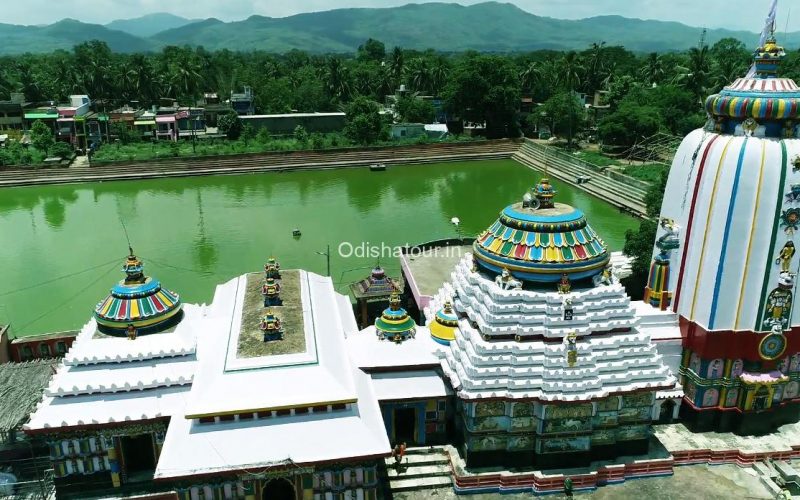 Ladu Baba Temple is situated at a distance of 13 km away from Nayagarh near Sarankul and 70 km from Khordha. This place is famous for the Baba Ladukeswar temple. The Siva Linga of Ladukeswar is popularly known as Ladu Baba. The temple’s construction for more than 1,000 years reveals. Besides the temple, there are Durga Mandir, Angad Murthy, Lord Rama, Lakshmana, Mata Sita, Bada Thakur, Lakshmi Mandir, Dasa Mahavidya Navagraha, Suryamandir also worshipped in Ladukeswar Temple. Sarankul Ladu Baba Mandir is a famous temple in Nayagarh District.

Raghunath Jew Temple is located at Odagaon and it is 26 km distance from Nayagarh town and 10 km from Sarankul. Here the neem wood-made Lord Raghunath Jew (Ram), Laxman, Mata Sita is worshipped. According to legend, the place was the Yagan Kunda of Atri Muni. According to Nayagarh history, the 19th king of Nayagarh, Mrityujay Singh, built the temple in 1763. Ramanavami is the main festival of Raghunath jew Temple. Every year thousands of devotees come here to see the Festival. It is an attractive place for visitors. This is also Sadhana Pitha of Kabi Samrat Upendra Bhanja. Raghunath Jew Temple is one of the most popular famous Temple in Nayagarh district, Odisha 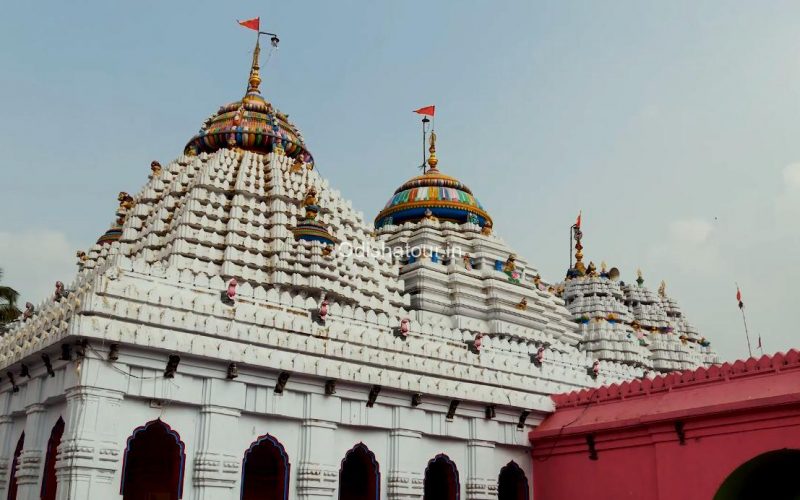 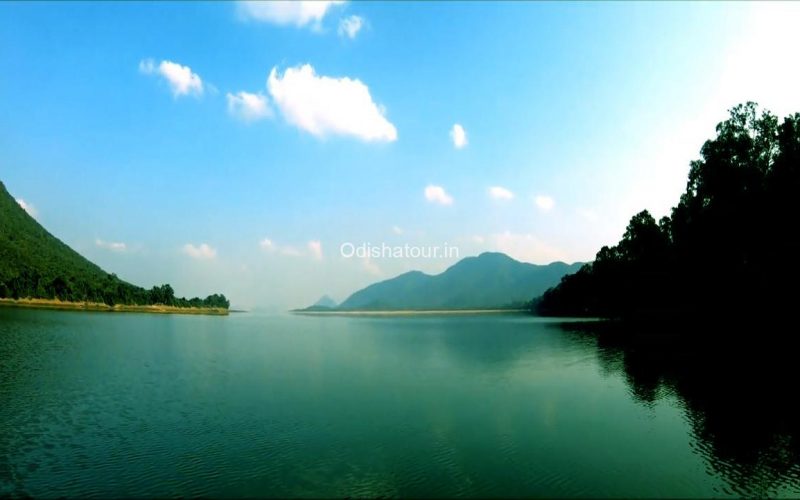 Baramul Gorge is situated in Gania block at a distance of 25 km away from Nayagarh on the bank of river Mahanadi. This is a place where the scenic beauty of Tikarpara gorge can be enjoyed. This small village is prominent due to the magnificent Mahanadi gorge on the banks of which it is situated. From Sunakania hills up to Barmul, the course of the river is known as the Satakosia Ganda (Gorge), having a water spread of about 22 km. Baramul, 110 km from Bhubaneswar. It is famous for its unique gorge ecosystem and for being a beautiful picnic spot. The Baramul Gorge is one of the best Tourist places of Nayagarh, Odisha.

The Kuanria Dam is 7 km away from Daspalla town, and it is located near Odasar village and about 50 km from Nayagarh. A beautiful Dam flanked by blue hillocks and a 1.5 km long dam over River Kuanria. It is a medium irrigation project and a water reservoir. The natural beauty of the Dam can be enjoyed in the time of sunrise and sunset. There is also a Deer park having more than a hundred spotted deers adds to its attraction. The dam has a viewpoint for tourists that one can see the full view of the dam. The serene beauty of the hills, river, forests and deer park attracts visitors during winter. The Kuanria Reservoir is one of the popular Tourist places in Nayagarh District. 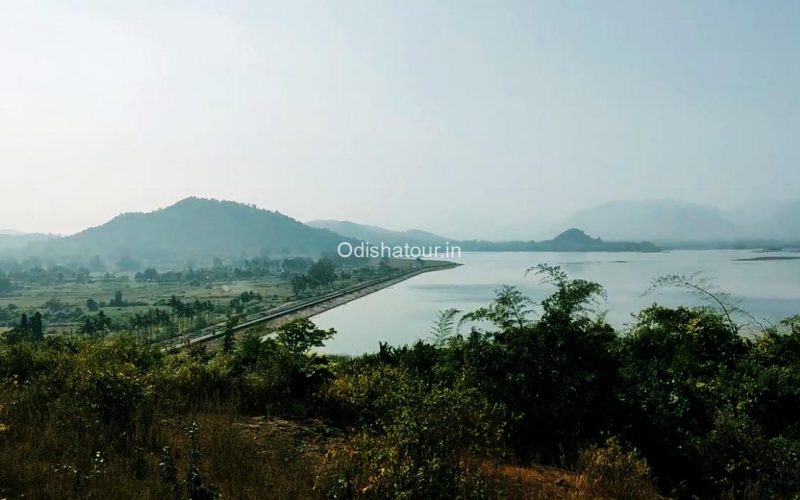 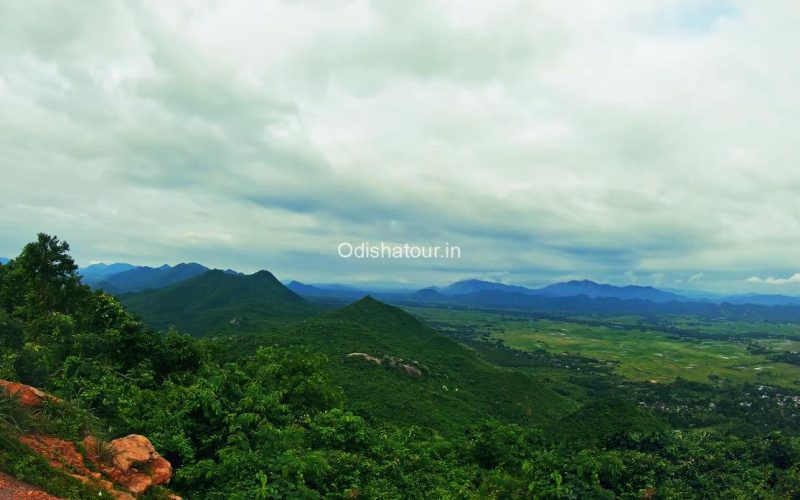 The goddess Maa Maninaga Temple is located in Ranapur town and at the top of the Maninag hill. Ranapur Gada is located at a distance of 28 km from Nayagarh Town. The goddess Mani Nageshwari is worshipped in the Maninag hills. There are also Tala Maninag and Upar Maninaga Peeth on this hill. The Tala Maninag temple has located at the foot of the Ranpur hills. The natural beauty of the hill, and the dense forest attracts many tourists during the winter evenings. The Maninag Hill and Maninaga Temple are famous Tourist places in Nayagarh, Odisha

Dutikeswar Mandir is a most popular tourist places in Nayagarh, Odisha. The temple is situated at the foot of Sulia hills, 8 km from Odagaon near Jamupatna and 32 km from Nayagarh town. Dutikeswar Mahadev is the presiding deity of this place. Throughout the year devotees from different part of Odisha come here to worship Lord Mahadev. Kartika Purnima is the famous festival of this temple. A centuries-old Banyan Tree popularly known as Kalpabata stands magnanimously in front of the temple adjoining a pond. Temples dedicated to Goddess Bana Durga, the Sun God and Astabhuja. A temple is a beautiful place for a picnic & religious importance. 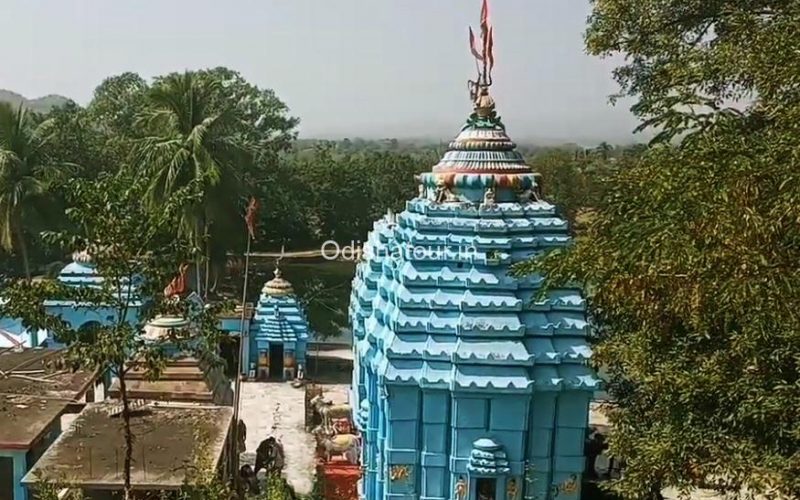 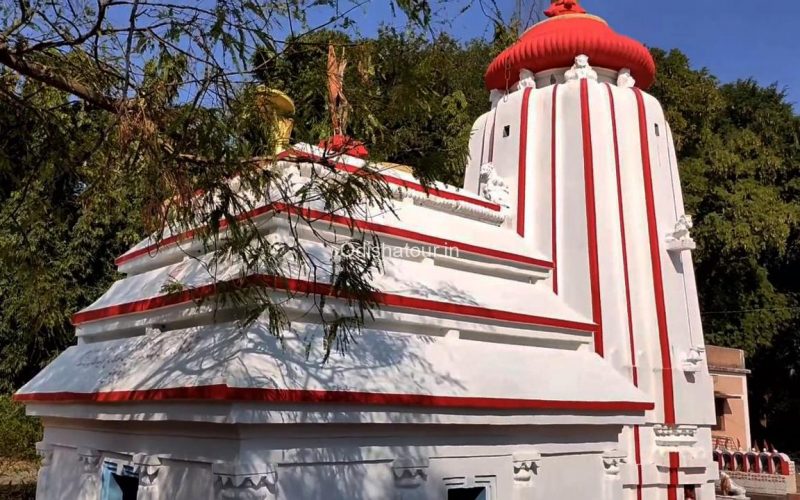 Narayani Temple is situated near Nayagarh Town. The road from Kantilo to Bhubaneswar is 5 km away from Chakada village. It is the famous Narayani temple of Nayagarh. Maa Ashtabhuja Singhbahini Durga has worshipped here. The height of the Maa Narayani idol is 10 feet in height. Maa Durga statue made of a Muguni stone called Kalapat. There is a pond in the vicinity of this temple, and there is a Yagan Kunda in it. Legend has it that the place was once the kingdom of Gosingh. The giant Goshen was sacrificing it in the pool. Narayani temple is one of the popular famous temple in Nayagarh District.

Maa Dakhinakali Temple is situated only half km away from Nayagarh town towards Dasapalla. Goddess maa Dakhinakali is worshipped by the devotees. Dakshina Kaali Temple is one of the most famous temples in the Nayagarh District. Besides the there is a Ganesh temple, Siva temple and maa Lakshmi temple inside the campus. Pana Sankranti is the main festival of this Temple. Devotees come here for getting a wish from Maa kali. The local people believe that maa kali fulfil all their wishes. Maa Dakhinakali Temple is a popular tourist attraction places in Nayagarh District. 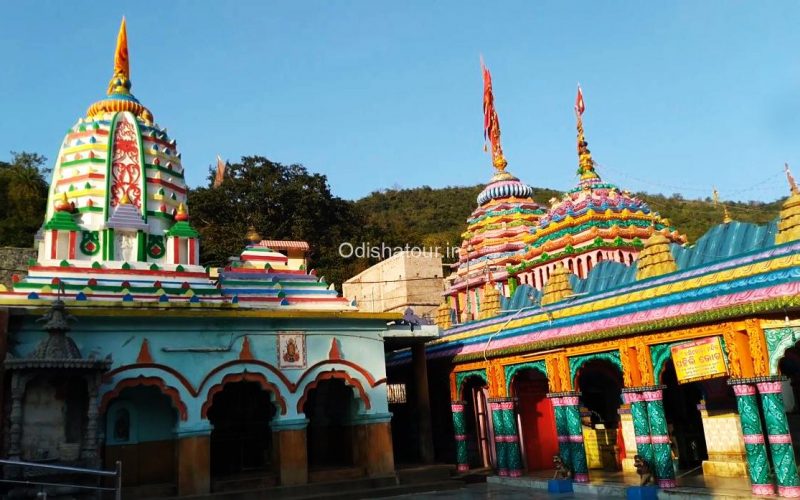 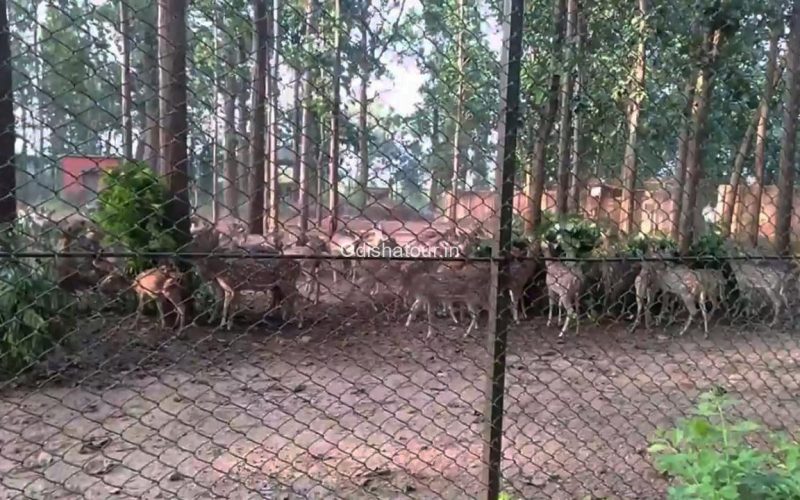 The Kuturi deer Park is located inside the Mahanadi Wildlife Division Sanctuary and is around 8 km from Baramula. It is a place called Kuturi, which houses the Habitat Development Centre for facilitating the natural breeding of wild animals. This area contains a pond, salt lake, fodder variety Napier grass and an orchard with varieties of indigenous decorative and medicinal plants. There is a cottage watchtower where free movement and activities of animals are monitored at night. Kuturi  deer park and Kuanria deer Parks are one of the most best tourist places in Nayagarh, Odisha

The Panikhia Waterfall (Simili waterfall) is located at simili Village and is  about 20 km from Nayagarh town and 107 km away from Bhubaneswar. It is surrounded by lush green trees and rocks and the best picnic spot. The place is nothing but full of natural sceneries. It is an amazing feeling for visitors to a take bath. The beautiful natural atmosphere and the amazing sound of the waterfall attract the visitor. simili waterfall is the best place for groups, a family picnic and Feast on a winter day. Panikhia waterfall is one of the most popular tourist places in Nayagarh, Odisha. 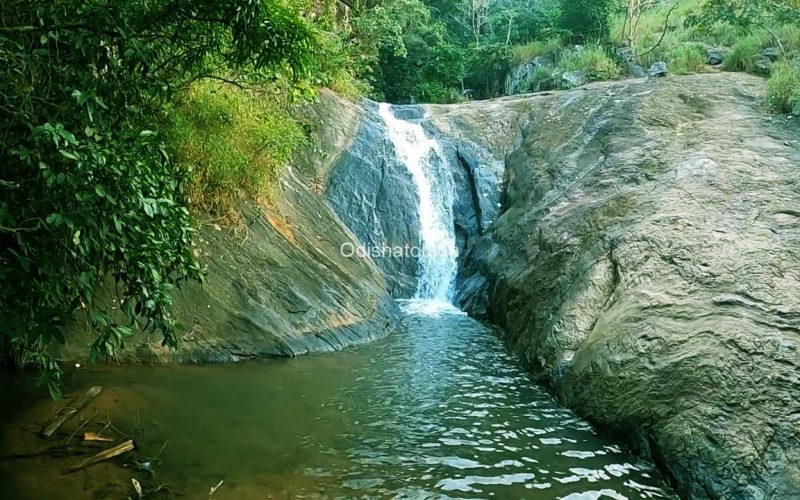 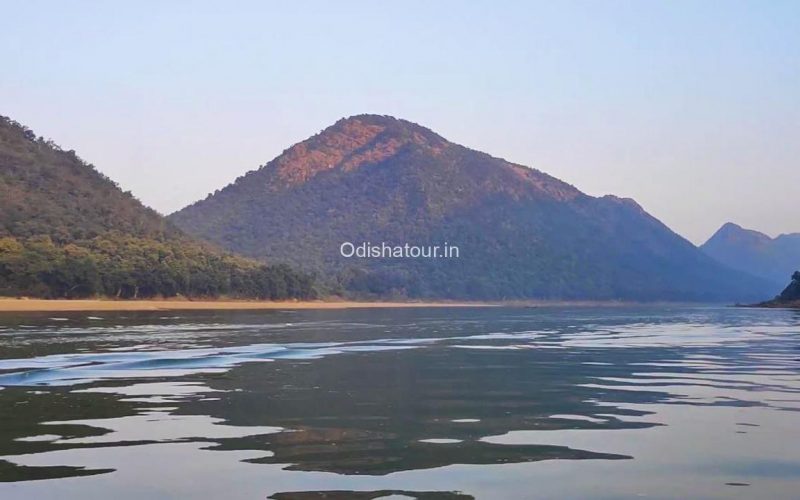 The Gokulananda temple is located at Sidhamula village,  and it is about km from Nayagarh town and 22 km from Khandapada. The temple is situated at the Bank of River Mahanadi and is a suitable place for a picnic. Late Sri Baba Swami Ram Laxman Dash Maharaja found this temple. There is a Vishnu mandir located at the top of that mountain. It is nice to watch the scenic view of the hill and the flowing water of Mahanadi from the hill as well as from Sidhamula bridge. There is an Eco-tourism centre on the top of the hill. Many people come here to see the scenic beauty of this spot and for a picnic in winter. Gokulananda temple is the best tourist places in Nayagarh District. 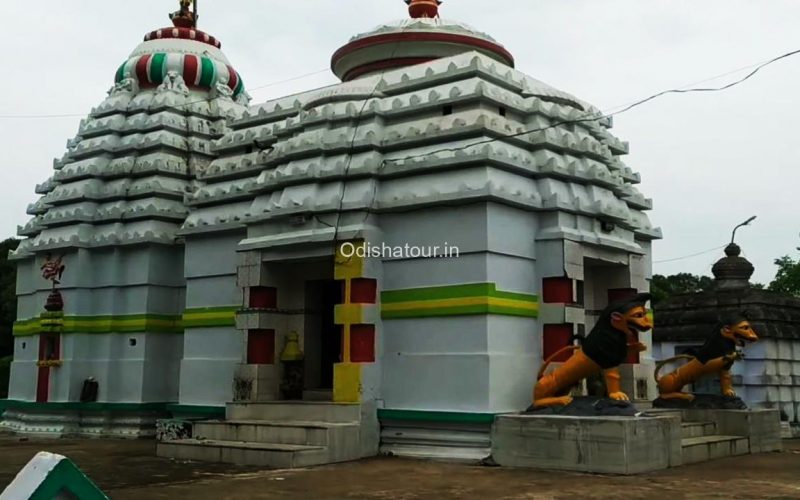 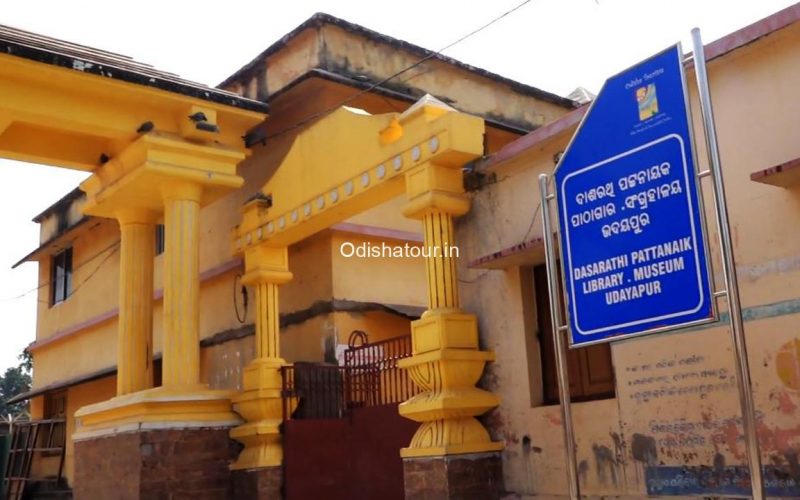 The Udayapur Library has situated around 27 km from Nayagarh Town. The Banchhanidhi Pathagara, Sri Aurobinda Sangrahalaya and the Jadumani Sahitya Sansada, established by the late Dasarathi Pattnaik (known as Dasia Aja) in a non-descript village Udayapur, in the culturally rich district of Nayagarh. It is a centre for pilgrims, lovers of literature and culture. Well-known scholars from all over the world have visited the institute. The Dasarathi Pattanaik museum has about 5,00,000 books in 30 different languages ​​and dictionaries in 30 languages. The Udayapur library has a rich collection of more than 65,000 magazines.

Khandapara is situated 19 km from Nayagarh. The place is surrounded by Mango groves and nine Mountains. The city of Khandapada attracts many monks and temples. One of them is the Jagannath Temple which is worshipped under the name Dadhibamana. The temple, built in the style of Pancharatha has Jagmohan and Nat Mandir Another attraction in Khandapada is Palace. Entering it, one can see the Daya Sagar, Rasik Raja Gopinath Temple. Khandapada Palace, Jagannath Temple are one of the most popular Tourist attraction Places in the Nayagarh District. odisha 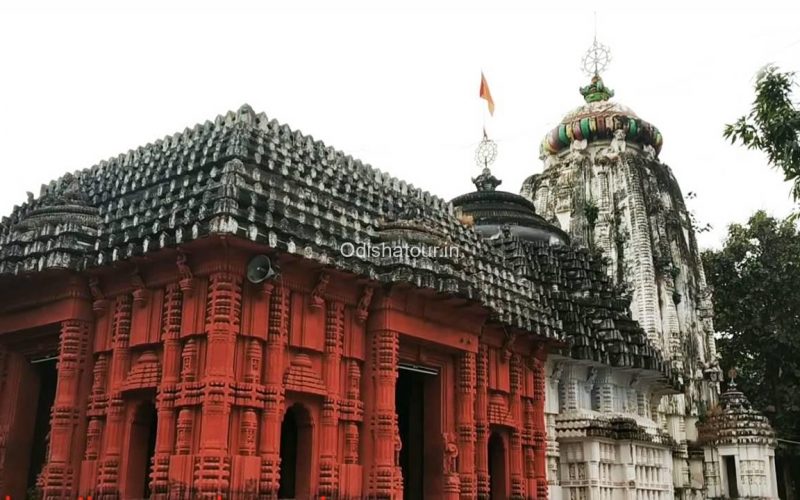 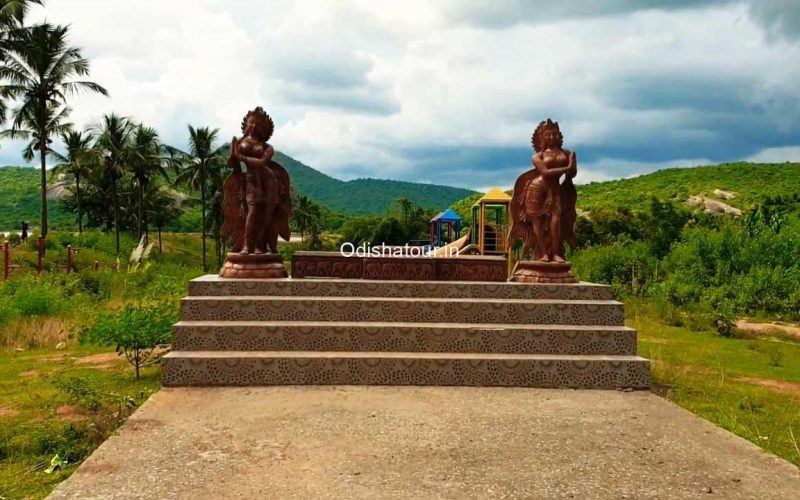 Sunamuhin Dam and Sunamuhin Park Tourist Place are located in the Khandapada forest range. It is just 2 km from Khandapada town and is about 15 km from the district headquarter of Nayagarh. The Dam has green forests hill on one side and Sunamunin park on the other side. It is a minor irrigation project for storage water. The place is Attracts tourists to come here in winter for a beautiful natural environment. It is a good place for a weekend picnic in the winter season. When the clouds touch the hills of the Dam during the rainy season, it enchants tourists. Sunamuhin Dam is one of the most popular tourist places in Khandapada, Nayagarh.

Rajgiri Waterfall is situated on a hill in the Khandapada Forest Range, and it is about 20 km distance from Khandapada town. This beautiful place is surrounded by lush green forests. The Rajgiri waterfall is one of the largest waterfalls in Nayagarh District, whose water is flowing from the top of the hill. After climbing the hill for about 2-3 km, the waterfall is visible. Rajagiri Hill Stations are recognized as Odisha tourism, so a large number of tourists come here in winter. Rajgiri Waterfall is tourist attraction places near Khandapada, Nayagrh 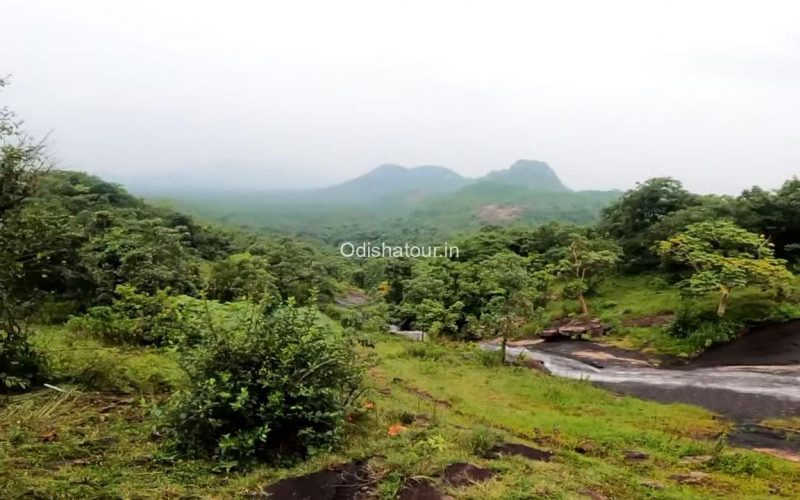 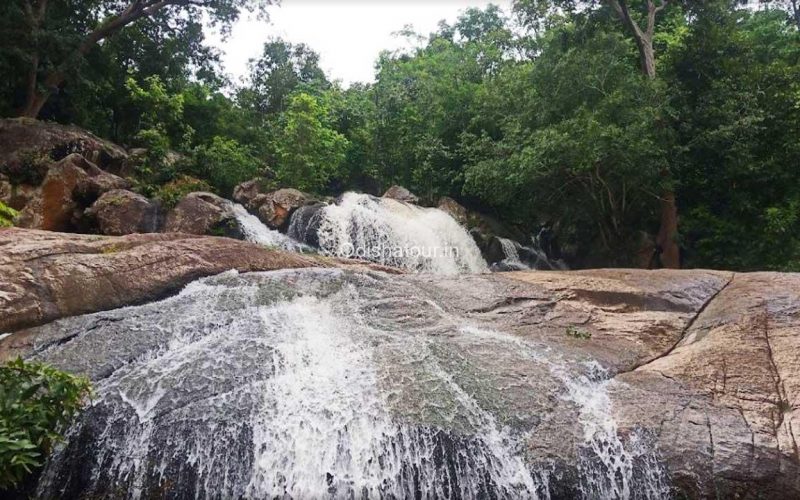 Ratnaganda Waterfall is located about 10 km distance from Dasapalla and 58 km from Nayagarh town. The water of this waterfall flows from the top of the hill through the dense forest. The winter season is the best time for group fests, weekend picnics and forest tours, and a large number of tourists come here during this time. The place has crowded as many tourists come here to enjoy its natural beauty. Ratnaganda Waterfall is a tourist attraction places in Nayagarh, Odisha.

Tarabalo Hot Spring is located at Bhapur and is 36 km distance from Nayagarh town. Bathing in this Tarabalo sulfur water cures skin diseases of the human body. The hot water spring is surrounded by farmland, and the surrounding areas are calm and muddy. Tarabalo Spring has a Kiasuni Thakurani temple, Hanuman statue and shiva linga, which locals come to worship. A large number of tourists come to this place in winters for hiking and bathing. Tarabalo Hot Spring is one of the holy hot spring in Odisha. 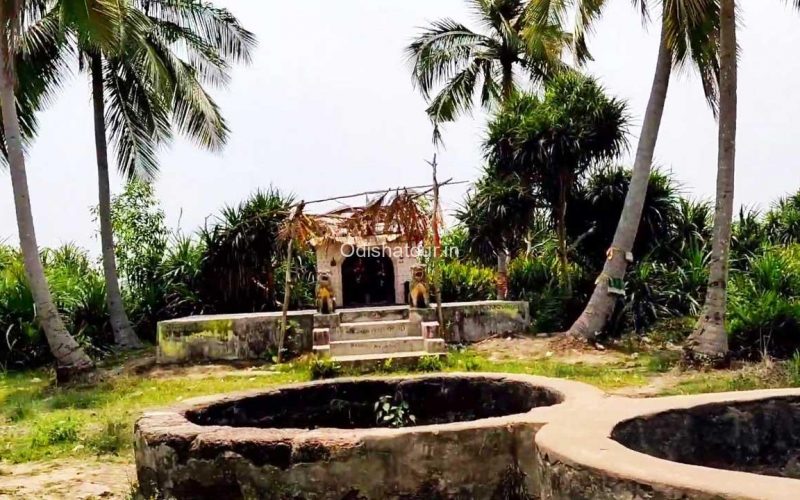